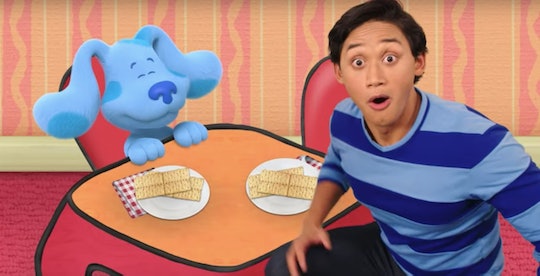 Everyone's favorite animated pup friend will back on TV soon, as Nickelodeon has finally announced the release date for the reboot of Blue’s Clues, starring brand new host Joshua Dela Cruz. So when exactly does Blue’s Clues & You! premiere? Mark your calendars, because Nick Jr’s new series will be here just in time for some holiday fun.

The new Blue’s Clues will debut on Nick Jr. on Nov. 11 at 9 a.m. ET/PT, Nickelodeon announced in a press release today. And if you're wondering what to expect with Nick Jr.'s new preschool series, the network explained that the format will be very similar to the Blue’s Clues we all fell in love with back in 1996 — just as Steve did with the beloved cartoon pup, Josh and Blue will work together to solve puzzle mysteries.

The new series, however, does have some upgrades. For example, there will be new CG-animation for Blue and her good friend Magenta, according to Nickelodeon. And while the Handy Dandy notebook will have its traditional blue crayon still, it will also come equipped with a phone. And that neat function allows all three of the show’s hosts — Steve (Steve Burns), Joe (Donavan Patton), and Josh (Dela Cruz) — to appear on screen together for the first time.

In a clip Nickelodeon shared on Monday, Steve and Joe, who are revealed to be Josh's cousins, viewers get a peek at them helping the show's newest host solve his first game of Blue’s Clues: Learning what Blue wants for her snack.

Among the updates, there's also a brand-new Handy Dandy Guitar that will aid in solving the puzzles. Additionally, Mr. Salt and Mrs. Pepper will have new twins — Sage and Ginger. And don't worry, according to the network, fan favorites like Tickety Tock, Slippery Soap, Shovel, Pail, Felt Friends, Mailbox, and the Thinking Chair will all return in the revival.

Blue’s Clues & You! will have more interactivity than the series did in the past, with the launch of play-along videos in Nickelodeon’s subscription learning app Noggin. The videos will "allow users to explore the stories in an immersive way, and engage with live-action host Josh and the animated characters by tapping, touching or swiping to navigate through enhances learning experiences," the network explained in the press release. Customization like colors and the creation of birthday cards for Blue will also exist within the service. And if your kiddo can't wait until November for the new series to premiere, the entire Blue’s Clues library is available to watch though Noggin.

While the new series is certainly exciting for fans, it's also an exciting moment in the new Blues Clues & You host's career. According to Deadline, this role will be Dela Cruz’s debut on TV as a series regular. Before this, he appeared on Broadway as the understudy for Aladdin, as well as in Here Lives Love and Encores!: Merrily We Roll Along, according to Deadline, and his IMDb page also holds credits for TV series Bull and Time after Time as well as the film Point Man.

With just a couple months to wait until you and your kids can delve into all the new adventures with Blue and Josh, you can help make the time go faster by catching up on Blue’s Clues now on Noggin.