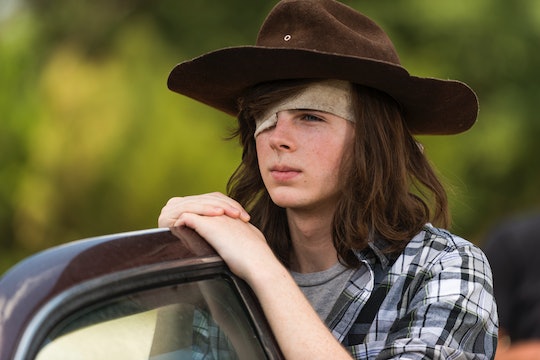 When Does Carl Die In 'The Walking Dead' Comics? He's Been Through A Lot

Carl is one of the few characters who is still ready to fight in the wake of Negan's arrival on The Walking Dead. He's in a unique position as the only character who has really grown up in this new zombie world, and he was forced to grow up insanely fast. Carl had to get real comfortable with a crazy amount of violence when he was very young and he's made tough decisions that adults more than twice his age would balk at. But after coming so far, will Carl's journey be ending anytime soon? When does Carl die in The Walking Dead comics?

Luckily for Carl, he hasn't been bludgeoned by a bat or eaten by a zombie yet. He's still alive in the comics, just a little bit taller and angrier and more of a moody teenager. (So, basically like he is on the show.) Carl must have nine lives, because even after being shot twice (and once in the face!) he's still managed to survive. Carl is in a dangerous position in the show, too, because he's not afraid when it comes to standing up to Negan. But, like the comics, that might be the very thing that keeps him safe.

Carl is second only to Rick when it comes to importance to the story, making both of them fairly safe from harm for the time being. Robert Kirkman, the creator and writer of the The Walking Dead comics, has said that in the event of Rick's death, he could see Carl succeed Rick as the protagonist, so it's pretty clear that Carl isn't going anywhere anytime soon.

As for the new threat that Negan poses, Carl's lack of fear is the very thing that causes Negan to have such a strange affinity and respect for him. He's impressed that Carl is so young and yet so tough, so that keeps Carl fairly safe from any harm at Negan's hands. Their relationship is a bizarre one, but so far it hasn't resulted in anything except for some weird chats where Negan doles out advice. (Don't take advice from Negan, Carl.)

However, just because Carl hasn't died in the comics yet doesn't mean he hasn't changed a great deal — and not necessarily for the better. The harshness of the post-zombie world hardened him. He's seen the people he loves die. He lost half his family when both Lori and Judith died fleeing the prison in the comics. He saw his father maimed when (comics) Rick lost a hand. Carl has dealt with being disfigured, thanks to the loss of his eye. Carl is alive, but he's far from the normal, happy kid he once was. And because of the world he grew up in, Carl will never be that kid again.