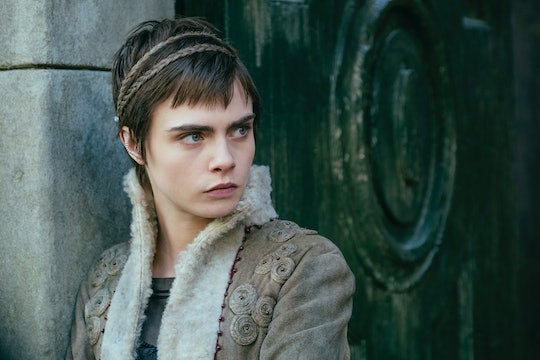 Carnival Row takes place in a fantasy world, but not one that offers much escapism. Its steampunk dystopia is populated with faeries and other creatures, as well as oppressive regimes that need to be toppled. The series will be coming to Amazon Prime soon, but when does Carnival Row premiere?

Carnival Row drops on Aug. 30, 2019, per TVLine. The series will consist of eight episodes in total, all of which will be available on the same day. Orlando Bloom stars as Rycroft Philostrate (called "Philo"), a detective in love with a refugee faerie named Vignette Stonemoss, played by Cara Delevingne. This romance proves to be a problem because the place where they live, a Victorian-esque city dubbed The Burgue, is intolerant of cross-species relationships. Faeries aren't the only mystical beings who have been forced to take refuge in The Burgue, but one group of many; when men invaded their respective homelands, they had no other choice but to leave.

And in case that didn't seem like enough of a story to keep those eight episodes packed to the brim, there's also a series of murders that need investigating. It sounds like the improbably named Philo is going to be quite busy getting to the bottom of things while keeping himself — and Vignette — safe.

Other characters populate the world of Carnival Row as well. There's Agreus (David Gyasi), a wealthy faun; Imogen Spurnrose (Tamzin Merchant), a gal who has her eye on Agreus for the aforementioned fortune; Tourmaline (Karla Crome), a faerie poet; and Piety Breakspear (Indira Varma), the matriarch of the family that rules The Burgue. If it's starting to sound like an excess of story for such a short run of episodes, don't fear: Carnival Row has already been renewed for a second season, according to Deadline. It will have enough time to get to the bottom of every mystery (hopefully).

The trailer gives fans a hint at just how sprawling its story is — and how generous its CGI budget was. The Burgue is a massive city with winged beings flitting around above its skyline, and nothing good going down on its streets. Its mystical citizens are openly discriminated against, with the humans rallying to keep them out of the city and even attacking them on the street.

The racial allegory there seems obvious. It's a common enough trope in fantasy to use supernatural creatures as a metaphor for real world prejudice, but it tends to erase real world prejudice in the process. Most (but not all) of the actors playing faeries in Carnival Row appear to be white. It's unclear whether this show will also contend with the very real discrimination many people face, or if it will just metaphorically hint at it through the forbidden love story of two white heterosexuals.

Carnival Row appears to be trying to tell a timely story under its veil of fiction, with all its talk of refugees and immigration. But until the show premieres, one can only speculate about how successful (or not) its execution of those topics will be.