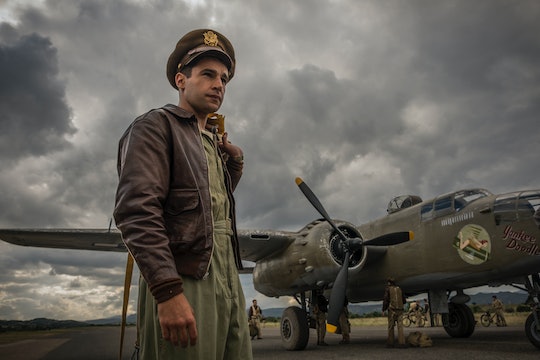 You may know Catch 22 as the famous WWII novel by Joseph Heller that you neglected to read in a college literature course (...just me?), but soon you'll be introduced to it in a different way. A new adaptation is coming to Hulu in the form of a star-studded miniseries. But when does Catch 22 premiere on Hulu?

According to Deadline, Catch 22 will debut on Friday, May 17. Christopher Abbott stars as protagonist Yossarian, but the cast is an impressive one: Kyle Chandler, George Clooney, and Hugh Laurie also star, among many others. It's unclear whether all six episodes of the series will be dropping at once or whether Hulu will parcel it out episode by episode, like they do with The Handmaid's Tale and similar shows. The fact that it's described as a miniseries makes it unlikely that the show will continue past a single season, but who knows? They said that about Big Little Lies too and now Meryl Streep is wigging up for Season 2.

Those unfamiliar with Catch 22 (perhaps those of us who skipped out on reading the novel) might not know what to expect from the show. Though it's about serious topics, it's a satire — and the trailer for the Hulu series reflects that humor.

Even if you haven't read Catch 22 before, you've likely heard the saying; it describes an inescapable, contradictory dilemma just like the one Yossarian finds himself in. The novel inspired the phrase. Yossarian doesn't want to partake in the violence of warfare, but if he tries to avoid it, then he violates a bureaucratic rule called Catch 22. The rule states that being concerned for one's safety in a dangerous situation means that you're rational and sane. Happily rushing into combat would be irrational, but wanting to avoid violence means you're mentally sound and therefore ineligible to be relieved from active duty. An inescapable, contradictory dilemma.

In a Making Of featurette by Hulu, Abbott explained that Yossarian spends much of his time trying to get out of service, but he's hemmed in by the rules and everyone surrounding him. He's powerless in the situation that he's found himself in, which is something that may resonate with a lot of viewers. You don't need to have fought in WWII to understand Yossarian's situation on a metaphorical level. "His logic makes sense," Clooney remarked in the featurette. "But if we all thought that way, the world would be in terrible shape."

Clooney served as a director and producer on the project, on top of playing the role of Lieutenant Scheisskopf. Many have thought the novel would be difficult to adapt because of its tone, which Clooney acknowledged during an appearance on The Hollywood Reporter's Awards Chatter podcast. "This is a tough nut to crack — famously, one of the toughest nuts ever to crack," Clooney said. "But, given six episodes, you can get to know the characters, and if you get to know them, when they die, it matters."

You can see if Catch 22 succeeded with the material on May 17.