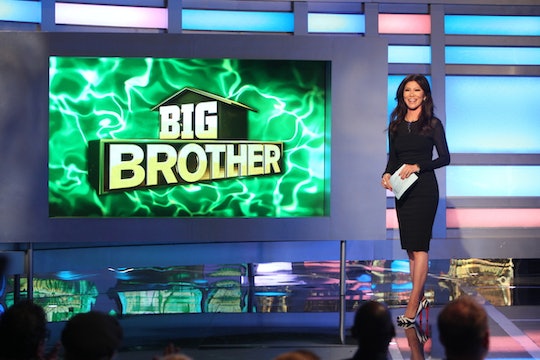 A couple of weeks ago, host Julie Chen revealed some big news. For the first time ever, there'll be a celebrity edition of Big Brother in the U.S. Naturally, fans are already incredibly excited about the show and are wondering when does Celebrity Big Brother premiere? Unfortunately, there's no official premiere date just yet, but it is set to premiere in early 2018.

Although no official date has been set, the show will probably air around the same time as the 2018 Winter Olympics, which airs on NBC. Typically, CBS only airs reruns during this time, but the network seems to believe Celebrity Big Brother will be big enough to bring more viewers over to their channel. "Can you imagine while the Olympics are running the figure skating competition [that] we have our classic Big Brother Slip 'n Slide competition with celebrities?" Julie said to The New York Post. "Who's turning away from us? Not me!" Still, she also made it clear that the scheduling hasn't been set yet, and fans will just have to hold tight for an actual premiere date.

While the celebrity edition will be a bit shorter than the regular Big Brother season, everything will pretty much stay the same. The show will still air multiple episodes each week, which will include the Head of Household and Power of Veto competitions, as well as the live evictions. Viewers will also be able to watch the live feeds on CBS All Access, just like a regular season.

Thus far, there's been no news about which celebs will be cast, but as Julie told The Hollywood Reporter "it's not going to be all Oscar winners." Still, fans have already put together a list of who they'd love to see appear on the show. On the top of the list are Tiffany "New York" Pollard, who appeared on the UK's Celebrity Big Brother, and YouTuber Shane Dawson who has always been a big fan of the show.

For now though, everyone's keeping quiet about what to expect in the celebrity edition, but perhaps at tonight's finale some more information will be revealed about the celeb edition.

When the news was first announced, Julie told The New York Post that CBS was "just starting the process" of finding celebs for the show. She also joked about the possibility of celebs reaching out to CBS to try and be on the show. "I know Jimmy Fallon is a big fan of the show," she said. "If he does do it, I bet we could get [Stephen] Colbert, [James] Corden, and [Jimmy] Kimmel. Can you imagine?"

I certainly can't. What would the world do if the best late night talk show hosts all disappeared to live in the Big Brother house? It would be a strange time, although watching them participate in absurd competitions and evict each other from the house would be entertaining. Great, now I actually want this to happen. Why do you tease me like this Julie?

Anyway, the point is, while the show probably won't be booking Beyoncé, the door seems wide open for any celeb to enter the BB house. Until then, fans can just focus in on tonight's finale.

After returning player Paul successfully dominated this whole game, it's unsurprising that he's made it to the final three. Along with him are good friends, Christmas and Josh. However, one of them will have to go to jury while the other two remain, and it'd be shocking if Paul didn't make it to Final Two. So who's heading to jury and who will ultimately win the game? At this point, it seems Paul is a shoe in to win, but this is Big Brother, and it's always best to expect the unexpected.