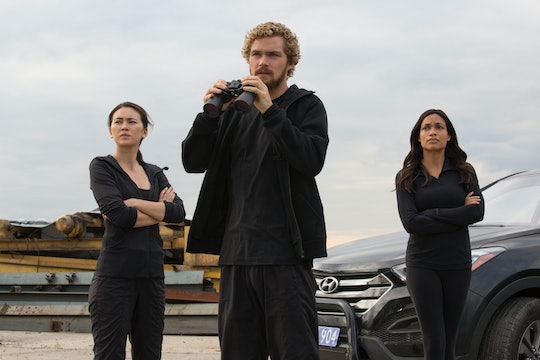 Fans Are Eager To See Claire On 'Iron Fist'

As with every Netflix Marvel show thus far, night nurse Claire Temple will appear in Iron Fist. At the end of Luke Cage, Claire was seen taking a tab from a flyer for Colleen Wing's dojo. Colleen becomes a friend and presumably a love interest for Iron Fist/Danny Rand, which explains Claire's connection. While it's a fact that Claire will be on the show, many are wondering when does Claire appear on Iron Fist? Unfortunately, fans won't be seeing Claire in the first episode, but according to IMDB she will appear in at least six episodes of the first season, which is basically half of the 13 episodes that make up the season.

Fans can expect to first see Claire in Episode 5 and then in most of the proceeding episodes that follow. However she's not listed as appearing in the finale. Based on the previews, it's clear Claire will be playing nurse to Danny just as she has for Matt Murdock, Jessica Jones, and Luke Cage in the past. It also looks like she'll be helping Danny and Colleen go up against a foe that may be The Hand, since she's somewhat familiar with the villain. During Daredevil Season 2, Claire saw the affects of The Hand when they broke into the hospital she worked at. It was this event and the hospital's attempt to cover it up that led Claire to decide to quit her job and help the superheroes of New York City.

After Iron Fist, Claire is also set to appear in The Defenders. While some fans worried Claire would die and thus be the cause for all the Defenders being together — similiar to how Agent Coulson "died" and brought the Avengers together in the first Avengers movie — this doesn't seem to be the case. Rosario Dawson, who plays Claire, is listed as appearing in six of the eight episodes that make up The Defenders series. She's also credited as appearing in the second season of Luke Cage, so fans have no reason to worry about her, for now at least. It looks like she'll be just fine. Besides, with four superheroes watching her back how could she not be?

Fans have also been hoping for a show all about Claire, but that doesn't seem to be on the Netflix docket at the moment. Besides The Defenders and Luke Cage Season 2, fans can expect to see a third season of Daredevil, Jessica Jones Season 2, and the first season of The Punisher, in the next two years. If Claire does one day get her own show, it won't be anytime soon.

For now, fans can see Claire in Iron Fist when the new series premieres on Netflix on Friday, March 17.