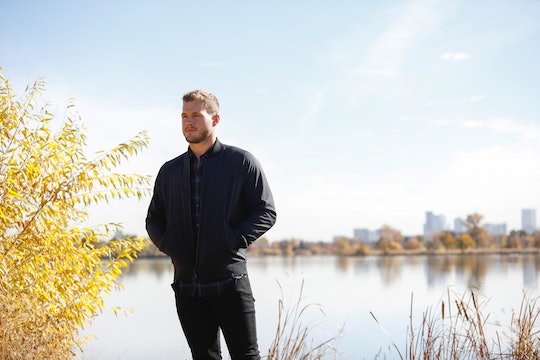 If you're sick and tired of seeing all the promos of Colton jumping the fence on The Bachelor, join the club. With all the hype, you'd think it'd have aired already — especially after all the drama surrounding "who's really there for the right reasons" and "who wants to be engaged at the end of it." Yeah, I'm tired of the teasers, too. Since it wasn't shown this past week, and time is running out before hometown visits and the final rose ceremony, it'd be great to know when Colton will jump the on the fence on The Bachelor. Enough toying with my emotions already, ABC. Apparently, the internet agrees.

If you're feeling the complicated mix of anticipation and annoyance like me, Bachelor Nation host Chris Harrison, recently revealed to Entertainment Tonight there are "a few episodes left" before the infamous fence jump. Sigh. That means it could happen on the next episode, or not. Gee, thanks, Harrison. The good news is hometown dates are coming up and that always includes plenty more drama as well as the lead-up to the fantasy suite situation. Maybe something went awry on the overnights and that's why Colton decided to make a break for it. To be clear, I think most Bachelor fans (me) don't care what the reason is — just show us the jump already. I can't take another week with another teaser and no joy.

In that same interview with ET, Harrison explained why the dramatic fence-hop was a big moment this season. "This is your life," he said. "This is hopefully the woman of your dreams and somebody you're going to spend the rest of your life with. You should care about that. You should want to fight for that; you should want to leap over a fence for that. That's kind of where he was. He was, when push came to shove, he was ready to push back." OK, but when does it happen though? Like, an exact air date and time? I'm not the only one. Twitter has been very focused on the absence of fence-hopping and I can't lie — there's an overall feeling of betrayal, ABC.

Regardless, if anything Harrison says is true, that means Colton's frustration may come from one of the women not being as committed as he'd hoped. And it's unlikely it happens during a hometown visit. The show is known for surprises. Ex-boyfriends, gossip, and she-said-she-said are all part of the package. When it's that close to a potential engagement, there's a lot at stake. But again, who cares? JUST. SHOW. THE. FENCE. HOP.

Colton himself referred to the fence jump as “the most pivotal moment” of his season so it's understandable why the network would put it off until near the end. And in case you want actual answers instead of speculation, Colton put this thing to rest telling The Hollywood Reporter in a later interview you'll see the fence jump during the fantasy suites segments. "Fantasy Suites week was the biggest week in the entire journey," he said. "The jump was the most emotional and the most physical that I had to be the entire season." That could be in the next episode, or the one after. The anticipation is legit setting the internet on fire.

Obviously there's still a lot to process before this fence thing happens, and it's unknown who triggers Colton's emotional state to the point of him wanting to flee the scene to clear his head. With The Bachelor's history of playing up certain storylines or dramatic plot points, it could all turn out to be nothing substantial. Not to say TV execs are doing what's best for ratings, but it's not out of the realm of possibility. Especially since every episode has been "the most dramatic episode ever."

With four women and four hometown visits still to come, emotions are at an all-time high. Where some tapped out because they knew they weren't ready (go, Heather!), or because they couldn't compete with other women for Colton's heart any longer (sorry, Elyse), the remaining four aren't exactly safe — and based on the swirling accusations, neither is Colton. If anything, it's going to get a lot worse before it gets better. Rest assured: you'll see the fence jump very soon and it'll probably be "the most dramatic episode of the season." Again.