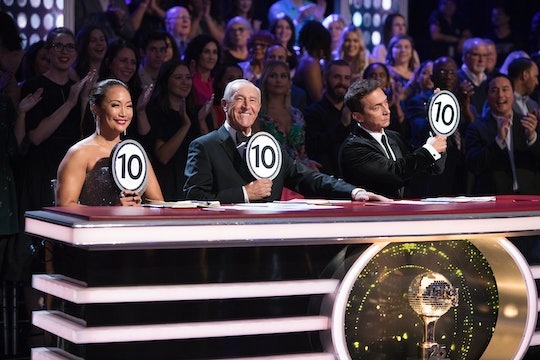 For those of us who live and breathe for reality TV, looking forward to each new season of shows like Dancing With the Stars comes naturally, especially since you can typically expect each season to premiere like clockwork. But this season is premiering a little later and running a little shorter, so when does Dancing With the Stars Season 26 return? It’s definitely going to be more fast-paced this time around since there will be just four episodes and 10 contestants instead of the usual 12. It even premieres later than usual thanks to the reboot of American Idol, which has taken over the Monday night time slot for the time being.

Instead, DWTS Season 26 will premiere on April 30 and conclude on May 21, just in time for The Bachelorette Season 14 to premiere on ABC the following week on Memorial Day. The show's later debut is not the most ideal situation by any means, but it does still give fans the spring season of DWTS, even if it is considerably shorter than the typical 10 week season that the show sees each March through May. DWTS hasn't had a season this short since its inaugural season back in 2005, which had just six episodes.

However, even though we know when it's coming back, the list of contestants for the season has yet to be announced, though we do know it's going to be restricted to only having athletes hit the dance floor. As TVLine reported back in November 2017, Season 26 will welcome 10 athletes as DWTS competitors as opposed to the usual lot of stars fan are used to seeing.

There are some people who have already expressed interest in joining the cast, though. In fact, 2018 Winter Olympic figure skater Adam Rippon told People Now that if given the chance, he would consider competing on the dancing competition show. "If the opportunity came up, I would love to do it," he said, adding, "I’ve never danced with a partner before, so that would definitely be something challenging."

Rippon isn't the only Olympian with eyes set on the TV ballroom, though. Fellow figure skater Mirai Nagasu who competed in the women’s free skate event at the 2018 Winter Olympics, told USA Today that she had DWTS on her mind the entire time. "I would like to be on Dancing With the Stars because I want to be a star," she revealed. "I made history here by landing the first triple axel for a U.S. lady at the Olympics so I think that is a big deal. I hope I get more opportunities to let my personality just shine." She also admitted that she considered her part in the competition as her "audition" for DWTS.

Plenty of star athletes have competed on DWTS in the past and even gone on to win the Mirrorball trophy, so it’s no big surprise that Season 26 has been dedicated to athletes entirely. Back in Season 4, speed skater Apolo Anton Ohno took home the prize and in Seasons 8 and 23, gymnasts Shawn Johnson and Laurie Hernandez, respectively, proved to be victorious as well.

There’s no word yet if every spring season of DWTS is going to be this short, especially since it looks like American idol is here to stay on ABC, but if the network keeps making the season unique in its celebrity competitors, it might still work out. As it stands, fans have plenty to look forward to with what I’m sure will be an exciting version of the show we've all come to love.