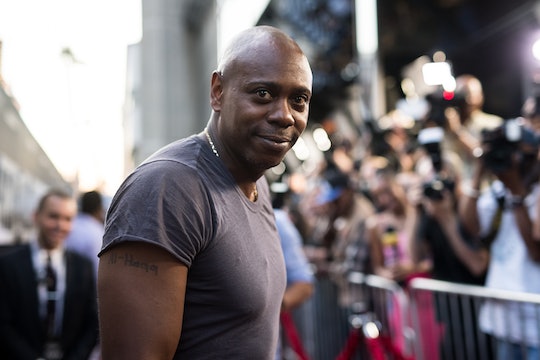 Comedian Dave Chappelle currently has four comedy specials on Netflix, but his fifth project with the streaming service is already on its way. His newest stand-up special, Sticks & Stones, will be here before the month is over. But when does Dave Chappelle's new Netflix special air, exactly?

It will premiere on Monday, Aug. 26, according to Vulture. Though it's far from his first Netflix collaboration, it has also been a few years since Chappelle released a streaming special. The four previous ones all debuted in 2017 and have since been packaged into collections: The Age of Spin: Dave Chappelle Live at the Hollywood Palladium and Deep in the Heart of Texas: Dave Chappelle Live at Austin City Limits are under the title Dave Chappelle, while the latter two were joined in Dave Chappelle: Equanimity & The Bird Revelation.

The official synopsis for Sticks & Stones, according to Collider, describes Chapelle as "unflinching and boundary-pushing." He'll be sharing his opinions on celebrity scandals, the opioid crisis, and more. It sounds like Sticks & Stones will have timely takes on everything going on in the world right now, though you'd never guess it from the trailer. The first glimpse at Chappelle's newest special offers very little stand-up, perhaps to keep audiences guessing up until the moment they press play.

The minute-long trailer opens with Chappelle walking through what appears to be the desert, with nothing in sight but endless sand and sky. A voiceover (provided by Morgan Freeman, no less) introduces him, saying, "This is Dave. He tells jokes for a living. Hopefully, he makes people laugh. But these days, it's a high stakes game."

The narrator then wonders how they got there — not metaphorically, though. He literally wants to know how Chappelle got to the desert and what's going on. But there's no explanation to be found as Chappelle makes his way to a waiting backdrop with a stool and microphone set in front of it. A storm gathers on the horizon. Who put it there for him? That's a question neither I nor Morgan Freeman can answer. All the narrator can offer in conclusion is, "If you say anything, you risk everything. But if that's the way it's gotta be, then okay, fine, f*** it. He's back, folks."

While the trailer may not have much to share in terms of Sticks & Stones' content, one gets the impression that it isn't going to shy away from controversial topics, with those comments about "high stakes" and the potential to "lose everything." That could mean the audience response ends up being polarizing, though it's difficult to tell ahead of the premiere just what the outcome will be. Viewers could be cheering on his hot takes as easily as they could disagree with them.

There's still some time to prepare yourself for Chappelle's upcoming special, perhaps by checking out the four that came before it. Fans of the comedian probably know what to expect from his work by now, so even if the response is conflicted, some laughs will surely be had in the process.