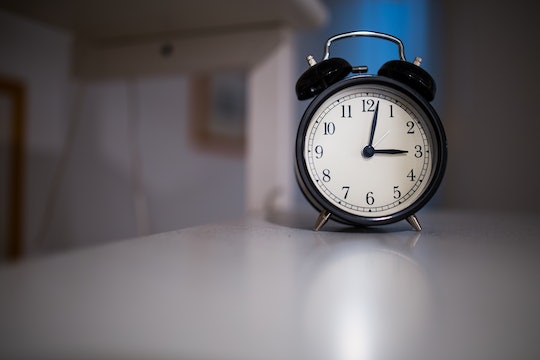 I never remember to change my clocks and appliances for Daylight Saving Time. Whether I'm supposed to be springing forward or falling back (definitely a helpful little phrase, by the way), I always have to search the internet to find out what time it is when I wake up. One day, I'll get it right ahead of time. But if you want to save yourself the confusion (and minor inconvenience) of needing an internet search to help determine the time, it'll be helpful to figure out when does daylight saving time 2017 begin. As it turns out, it's coming up soon.

This year, Daylight Saving Time in the United States begins on March 12. According to The Huffington Post, Daylight Saving Time officially commences at 2 a.m., which means you can change your clocks right before you go to bed to make sure you've got the right time when you wake up. Although the start and end dates used to be a bit all over the place, in 2007, the United States moved to a regular schedule, with Daylight Saving Time beginning on the second Sunday in March and ending on the first Sunday in November, according to LiveScience. Theoretically, knowing that there's a set schedule can help you anticipate when it'll be time to switch your timepieces. Additionally, it can also allow you to make sure that you preemptively get the rest that you need in order to function well the next day.

Spring's Daylight Saving Time is, in my opinion, even more of a signal that long, warm summer days are just around the corner than Groundhog Day. Daylight Saving Time exists to, essentially, do just what it sounds like it does: allow people to take advantage of as many daylight hours as possible. According to the aforementioned LiveScience article, Daylight Saving Time was first conceived by Benjamin Franklin so that people could use that extra hour of daylight, rather than having to waste energy on using indoor lighting after dark.

The first country to implement daylight saving time was Germany, which did so in 1916 during the First World War, to minimize the use of artificial lighting after dark, according to Al.com, which primarily covers stories related to Alabama. The United States adopted Daylight Saving Time in 1918 and then again in 1942 (which coincides with both World Wars) and then Congress passed the bill which revived daylight saving time in 1966. The Congressional bill also allows local entities to abstain from daylight saving time if they so choose. According to National Geographic, while most states observe Daylight Saving Time, most of Arizona, Hawaii, and many U.S. territories have opted out.

It probably goes without say that the end of Daylight Saving Time, in the fall, which means an extra hour to sleep (or, I suppose, do something productive), is a bit more universally appreciated. Although the beginning of Daylight Saving Time is often super unpopular, given that "springing forward" means one less hour of sleep, it means that days are getting longer, nights are getting shorter, and warmer weather is on the horizon.