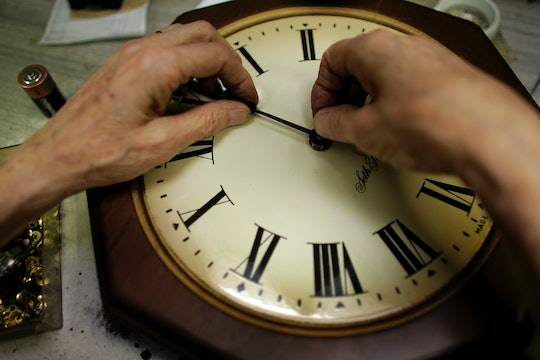 When Does Daylight Saving Time End In 2016? Get Ready To Gain An Hour Of Sleep

DST ends on the first Sunday in November, as Live Science reported. This year, it will end on Sunday, Nov. 6., and the time will be pushed back one hour at 2 a.m.

In reality, the end of DST this year is probably happening at the right time – right before election day on Nov. 8. Because, let's face it, voters will need all the sleep they can get to participate in such a crucial election. And generally speaking, if your body is programmed to waking up at a certain time, you may be able to beat your alarm clock – and that would be a total win.

But putting aside what may feel like a small victory in gaining an hour of sleep in November, apparently, DST has actually been proven to have negative health effects on your body. What's more, "gaining" an hour of sleep may not be such a victory after all.

According to a study cited by ABC News and published in HealthDay News, our bodies can't adjust to the "spring forward" time adjustment in March. Apparently, it messes with the body's circadian rhythm or internal clock.

"When you change clocks to daylight saving time, you don't change anything related to sun time," Till Roenneberg of Ludwig-Maximilians-University in Munich said according to ABC News. "This is one of those human arrogances — that we can do whatever we want as long as we are disciplined. We forget that there is a biological clock that is as old as living organisms, a clock that cannot be fooled. The pure social change of time cannot fool the clock."

And as for gaining an extra hour of sleep, Christopher Barnes, associate professor of management at the University of Washington, said that his research involving sleep deprivation has shown that people don't actually reap the benefit of an additional hour of sleep in November.

"Human beings aren't built for 25-hour days," Barnes said in an interview with CNN. "It throws people off because we're working against our natural process."

It's interesting research for sure. And at the end of the day, it's best to prepare for when your smartphones automatically adjust to a new time. Get your watches and wall clocks ready.