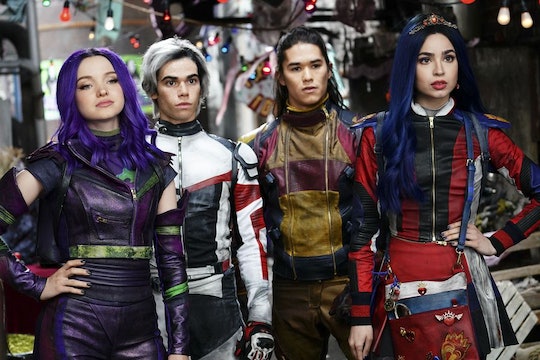 Fans Can Expect To See 'Descendants 3' Premiere Later This Summer

The announcement of actor Cameron Boyce's tragic death on Saturday has hit fans of the Disney Channel's Descendants franchise hard. Boyce's legacy will live on in his work, however, and that includes the latest installment of the Disney Channel's Descendants franchise. And those who are interested in celebrating Boyce's legacy might be wondering when Descendants 3 will premiere. As it turns out, fans won't have to wait much longer to see the highly anticipated trilogy.

Boyce, 20, reportedly died in his sleep after suffering a seizure brought on by an unspecified but ongoing medical condition he'd been receiving treatment for, a family spokesperson told ABC News. "It is with a profoundly heavy heart that we report that this morning we lost Cameron," they said. "The world is now undoubtedly without one of its brightest lights, but his spirit will live on through the kindness and compassion of all who knew and loved him."

In light of Boyce's death, some fans are revisiting his impressive history of work, a resumé that includes the upcoming Descendants 3 film. As for the latest installment's release date, it's set to premiere on August 2, according to a press release. The film will continue to tell the coming-of-age stories of the Villain Kids (aka the children of well-known Disney villains) as they struggle to find identities outside of their parents' infamous crimes. Boyce, for example, played Cruella de Vil's son, Carlos, according to The Telegraph.

Descendants 3 will pick up as the Villain Kids celebrate their graduation from Auradon Prep on "VK Day" and travel across the barrier to the Isle of the Lost to encourage other villains' children to come to Auradon, a school where the children of Disney heroes and reformed VKs attend. However, when a dark force breaks through the barrier and threatens Auradon, the Villain Kids must fight to protect the land and its inhabitants.

While the film will bring a number of beloved Descendants characters back to the screen, it's also expected to introduced fans to a few new faces, including Dr. Facilier's daughter Celia, Smee's sons Squeaky and Squirmy, and Greek God of the underworld, Hades. At this time, it remains unclear whether Boyce's death will affect the film's release date.

Although Disney hasn't discussed this detail yet, it did mourn Boyce's death in a statement to E! News. They described the young actor, who also played Luke Ross on Disney Channel's television sitcom Jessie, as an "incredibly talented performer," "a remarkably caring and thoughtful person," and "a loving and dedicated son, brother, grandson and friend."

"From a young age, Cameron Boyce dreamed of sharing his extraordinary artistic talents with the world," the spokesperson told the outlet. "As a young man, he was fueled by a strong desire to make a difference in peoples' lives through his humanitarian work." The channel extended their deepest condolences to Boyce's family, friends, castmates, and fans, adding, "He will be dearly missed."

Descendants director Kenny Ortega also paid tribute to Boyce in a statement released on Instagram. "Cameron brought Love, Laughter and Compassion with him everyday I was in his presence," Ortega wrote. "His talent, immeasurable. His kindness and generosity, overflowing. It has been an indescribable honor and pleasure to know and work with him."

While Descendants 3 isn't meant to be a tearjerker, Boyce's fans may want to keep the tissues handy when they tune into the premiere on August 2.