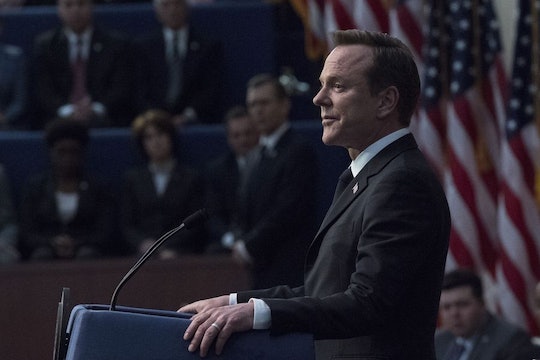 There were plenty of new shows that came out this past fall, but one of the best ones was Designated Survivor. The show follows Tom Kirkman (Kiefer Sutherland), a low-level Cabinet member, who ends up becoming president because everyone else above him in the presidential line of succession was killed in a catastrophic attack. The show is filled with twists and turns as Tom struggles to adjust to his new role while also trying to figure out who was behind the attack. Fans quickly got hooked on the new series and it's no surprise many are already wondering when does Designated Survivor return for Season 2?

Thankfully the show has already been renewed for a second season so there's no doubt there will be more of this political drama in the future. The first season premiered on Wednesday, Sept. 21 of last year, so the second season will most likely premiere around the same time in mid or late September 2017. No matter when it premieres, though, fans will certainly be tuning in. Not only does the show have an amazing plot, it also has an incredible cast that holds up the show. Starring alongside Sutherland, who does an amazing job as the lead, is Natascha McElhone who plays his wife Alex.

As the show progressed through it's first season, Tom stepped up into his role as president and it was amazing to watch his character development. However, it was also nice to see how his new role didn't totally change him and he remained the man he always was. Additionally, the show's mystery of who was responsible for the attack and then the big reveal of the truth (as well as the betrayal) was something that left fans with their jaws on the floor and with even more questions.

It's clear the first season was a total success and as it comes to an end fans can't help but be excited about what next season will hold. Season 1 was obviously only just the beginning and now that the show has established all the characters, apart from just how they relate to Tom, it'll be interesting to see where the story goes from here.

The Designated Survivor season finale airs on Wednesday, May 17 at 10 p.m. ET on ABC.