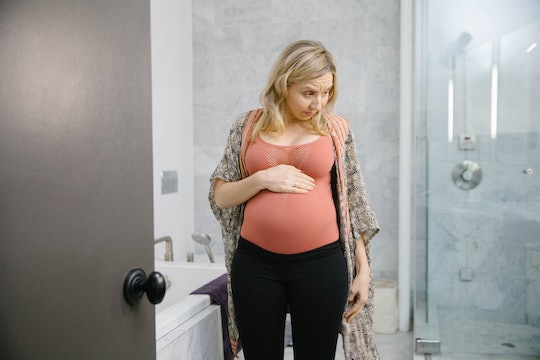 Here's When First-Time Moms Can Expect To Start Dilating, According To OB-GYNs

Pregnancy, birth, and motherhood have a unique way of opening up doors to conversations about your vagina — a lot of hormones and body fluids will do that to a person. Following each one of my late term doctor’s appointments, my husband would inevitably receive a text from his mother that said: “Any dilation?” Not batting an eye, we answered accordingly. But it always felt like speculation because even doctors can’t predict when a human body will begin preparing for labor. But they try to answer our questions, including: When does dilation start for a first-time mom? Turns out there are categories for these things.

“When it comes to dilation prior to the onset of labor, we divide our patients into two groups — nulliparous (never having given birth) and multiparous (having given birth),” says Dr. G. Thomas Ruiz, an OB-GYN at Orange Coast Memorial Medical Center in Fountain Valley, California, in an email interview with Romper.

Ruiz explains that the cervix of a patient who has given birth may passively dilate after 36 weeks. “This is just because they have had babies," he says. "It definitely gives them a head start. When their contractions do start, it results in a faster labor as compared to nulliparous women."

That means women who are experiencing a first-time pregnancy typically do not dilate until their contractions have started and the head has descended, he says.

As for the stages of dilation, Dr. Allison Hill, a board-certified OB-GYN and author of Your Pregnancy, Your Way, tells Romper in an email interview that it is during the active phase of labor that the cervix opens from zero to 6 centimeters. It is during the transition phase that the cervix continues opening to reach 10 centimeters and, well, if you’ve given birth before, then you know how that phase goes.

Dr. Yvonne Bohn, an OB-GYN at Providence Saint John's Health Center in Santa Monica, California, says that because due dates are estimates, it’s important for women to keep in mind that predicting dilation is also just that — a prediction.

"Every woman’s body is different,” she says. “In fact, many women may not show any dilation even at their due date. The reality is that the due date is an estimate with the delivery falling as early as two weeks before to up to two weeks after. Women can also have no dilation and then the cervix can open rapidly.”

Want to speed up dilation? While there are no special tricks, Hill says relaxation techniques during labor, like laboring in a warm bath, can help encourage the cervix to open.

And even though predicting dilation might be a long shot, here’s one thing I can promise is an absolute: The discussion of your lady parts will become ordinary. The other day I sat having coffee with my friend who gave birth two weeks ago and she said, “When will it stop hurting?” while pointing to her nether region. I took a sip and reassured her, the conversation as familiar as one about the weather.