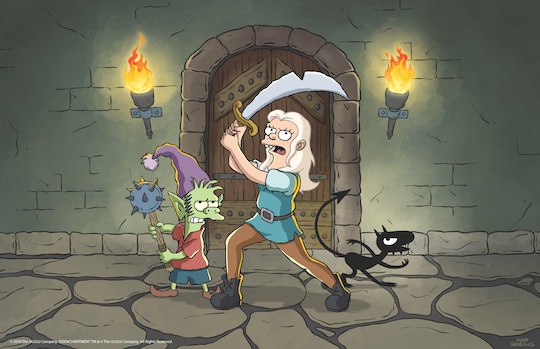 There’s never a bad time to introduce new adult animated content into your life. Disenchantment may not be as outrageous as other series in the genre, but it seems to share the kind of humor audiences have come to love from The Simpsons and Futurama. That’s probably because the same creator, Matt Groening, is also behind the upcoming fantasy cartoon. So I know I’m not the only one wondering when Disenchantment premieres on Netflix.

According to Deadline, Disenchantment premieres on Netflix on August 17 in its entirety. Like nearly every other show on the streaming platform, you’ll get the entire first season at your disposal right off the bat. In other words, your Friday is about to be spent glued to your TV, laptop, or tablet screen.

Judging by the trailer for Disenchantment, the show is essentially a crossover between The Simpsons and Game of Thrones. But, you know, with less nudity and murdered babies. It’s hard not to recognize the animation right off the bat, which is likely to draw in fans of Groening’s other animated series. This particular show is about Princess Bean, an alcoholic royal who is accompanied by her mythical sidekicks as they navigate through Dreamland. Ok, maybe it’s more like The Simpsons meets Game of Thrones meets The Hobbit. And I am here for it.

Before you get ready to hunker down on the couch with your kids on Friday to watch the animated series, it's important to note that it may not be suitable for all viewers. Its official rating is TV-14, so take that how you will. It could be a lot worse, but clearly this cartoon show is geared more toward teenagers and adults rather than toddlers. Obviously you can view the advised rating however you see fit and you know your kids better than anyone else, but there are sure to be some, ahem, adult themes.

In an interview with Esquire, Groening revealed that he’d been developing the idea for the show since 2012 or earlier. He began taking notes any time he thought of some other mythical creature or situation to include in the show until the show began to be a reality for him. But, he said in the interview, he’d been wanting to make another TV show for a while.

"I think about ideas for different TV shows all the time. What holds me back is knowing how hard it is to actually pull them off, and whether I really want to commit myself to something that keeps on going," he admitted. "The Simpsons is 29 years and running. Futurama didn’t last as long. So I have to really want to do it for me to plow forward."

In the same Esquire interview, Groening also said that having Netflix as a platform for a show of his this time around was both rewarding and challenging. While Netflix typically allows film and TV creators to run with their ideas, Groening said that he still wanted to make Disenchantment fun while not being too dirty or inappropriate. "Who’s to know what people will be bothered by?" he said.

Judging by the trailer alone, Disenchantment seems promising. At a time when Game of Thrones and Lord of the Rings are as popular and classic as ever, respectively, Groening’s take on Middle Earth fantasy is definitely timely. Plus, there are some amazing talents who lent their voices for the animated series. Abbi Jacobson voices Bean, Nat Faxon plays Elfo, and Eric Andre is the voice of Luci. And, according to IMDB, Billy West, who voiced Fry on Futurama, will lend his voice to at least one episode.

The premise as well as the cast of Disenchantment makes it seem like the next best animated adult show on Netflix. And luckily for those of us who are already dedicated fans of Groening’s work we’ll be able to see Season 1 on August 17.