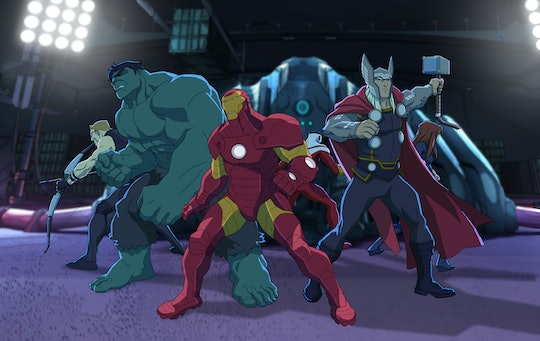 Disney+ Is Almost Here & Fans Can't Wait To Get On Board

Ever since Disney announced its plans to launch its very own streaming subscription service, fans have been preparing to get on board. Along with the family content Disney is known for, the new service will also feature movies and shows from its subsidiaries, including Marvel and LucasFilms. With all the Disney princesses, Stormtroopers, and superheroes the service has to offer, you may be wondering exactly when Disney+ will launch and how much it will cost.

Disney+ is set to launch on Nov. 12, 2019, which means all of its streaming content will be available going into the holiday season. For those who already have Netflix and Hulu subscriptions already, paying for another streaming service might feel like overkill, but the good news is that Disney is offering its service as part of a bundle. According to CNBC, Hulu subscribers can get Disney+ as an add-on service for $6.99 per month, or $69 for the year.

This move doesn’t come as a complete surprise, considering Disney now own a large stake in Hulu. As reported by Variety, when the studio made a deal with Comcast in May, it assumed full control of Hulu. “We are now able to completely integrate Hulu into our direct-to-consumer business and leverage the full power of The Walt Disney Company’s brands and creative engines to make the service even more compelling and a greater value for consumers,” Disney CEO Bob Iger said in a statement about the deal.

Disney isn’t the only studio heading into the streaming game. As reported by The Verge, NBCUniversal will launch its own direct-to-consumer streaming service in early 2020, along with other new streamers, including HBO Max and Apple TV Plus.

But when talking to Barron’s, Iger said that he believed Disney+ would stand-up to the streaming competition because of its content. “We’re not launching Disney+ to catch up to Netflix or even compete with them,” the Disney CEO told the outlet. “The marketplace is hungry for this, and we have a brand people know and love — Disney+ will have Disney, Marvel, Pixar, Star Wars, National Geographic, and more. There will be originals, a library of past movies, and recent releases like Avengers: Endgame. We believe there is a voracious appetite for what we make, and to deliver it over the top.”

With the launch of Disney+, you may start seeing some of your favorite Disney, Star Wars, and Marvel content leave Netflix soon. According to CinemaBlend, movies like Coco, Star Wars: The Last Jedi, and Thor: Ragnarok will leave Netflix by the end of the year, while other Disney-owned films including Incredibles 2, Solo: A Star Wars Story, and Black Panther will stick around until mid 2020.

While it might feel slightly tedious to add another TV subscription service on to your monthly bill, at least Disney is making it easy and somewhat affordable. Plus, the studio has plans to produce shows and films specifically for the service, which means you’ll have access to new and exciting Disney content you won’t find anywhere else. Luckily, with the Nov. 12 launch date, you won’t have much longer to wait.