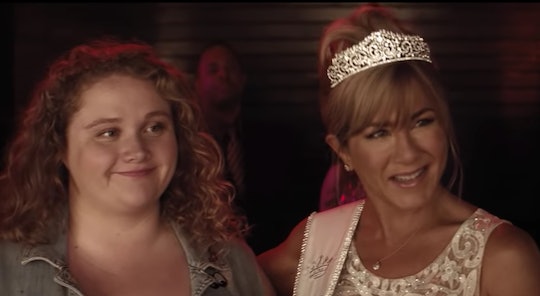 Netflix continues to produce shows and movies with relatable characters and fascinating plots — all with the convenience that they're available to watch whenever people want. And Netflix's newest film, Dumplin', certainly falls into these categories. After watching the trailer, which dropped on Wednesday, people will definitely be eager to know when Dumplin' premieres on Netflix.

The trailer for the new movie might only be two minutes long, but it packs a serious punch. In the trailer, people are introduced to Willowdean Dixon — or Dumplin' as her mom calls her — and her beauty pageant obsessed mother. In order to prove something to people, Dumplin' signs up for a pageant, which results in some serious hijinks, of course. But the movie isn't all fun, the trailer hints that there will be some sentimental moments and appears to come with an empowering message.

If that wasn't enough to love about the film already, it also stars the Jennifer Aniston speaking in an incredible southern accent as Dumplin's mom. Seriously, after watching the trailer once, people will not only fall in love with the film, but will want to watch it again and again.

And the great news is, people won't have to wait too long to see the movie: Dumplin' premieres on Netflix on Friday, Dec. 7, according to Entertainment Weekly.

Although waiting for the next three weeks to come might be a bit hard, the wait definitely seems to be worth it. People have taken to the comments of the trailer to share their thoughts about their first impression of the film. And so far, people seem to be loving it.

"I'm so excited for this!" one person wrote. "Came for Jennifer Aniston but stayed for what looks like a fun movie. Can't wait!"

"I will watch this because I love Rachel!" another commenter added, referencing Aniston's iconic role on the 90s sitcom, Friends.

"Finally, there's a reason for me to continue my Netflix subscription," another stated.

But there is an even better reason to be excited about this new movie. The film will feature brand new music written by Dolly Parton and songwriter, Linda Perry, according to Entertainment Weekly, with Parton singing an original theme song for the film. And if that wasn't a good enough reason to love it, then viewers will definitely appreciate the fact that Dumplin' was written and directed by two women, according to Entertainment Weekly.

Many people are pointing out that this film looks like the better version of Insatiable, a Netflix series also revolving around the pageant world, that faced criticism for being "dull," "unwatchable," and had a "fat-shaming plot," according to The Cut. But Dumplin' looks like a clear answer to that criticism; based on the trailer, it's anything but dull and will hopefully help encourage people to embrace themselves for who they are. And that sounds pretty watchable to me.

If people are seriously anticipating the film's premiere and can't wait any longer, there is something to hold them over — the book the movie is based on. Dumplin' by Julie Murphy is a young adult novel that was published in 2015. The movie seems to follow the book perfectly. In the book, there are still plenty of empowering messages and talk about Dolly Parton to please everyone.

Although the wait might seem long, it will definitely be worth it. This movie looks incredible and I can not wait for the first Dec. 7 to watch.