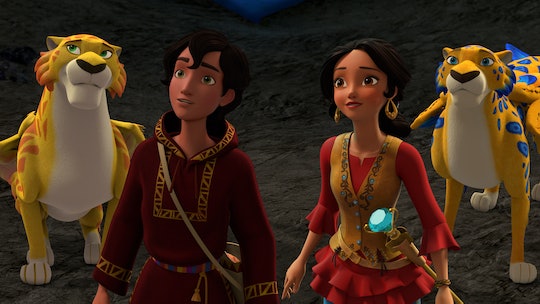 You'll Recognize Every New Voice On 'Elena Of Avalor' Season 3

On Elena of Avalor, the titular princess has been on a long journey to become queen. Now it seems like that goal might be within her grasp, especially since she'll have the help of some new friends in Season 3. Nearly all of those new pals will be voiced by well-known actors, and spotting each of them as they appear might add an extra edge of interest for parents watching the show alongside their little ones. But when does Elena of Avalor Season 3 premiere?

Luckily, the wait isn't long. The third season of Elena of Avalor premieres on the Disney Channel and Disney Now on Monday, Oct. 7. In no time at all, you'll be shouting out the name of a famous actor during a scene while your kid hushes you so they can focus on the plot. The list of guest stars is extensive, but every single new addition won't be appearing in the same episode. These familiar voices will be spread across the entire season as Princess Elena (Aimee Carrero) encounters new characters on her quests and adventures. Think of it as the Where's Waldo of voice acting, if you will.

Eugenio Derbez, Rachel Brosnahan, Tony Shalhoub, Auli'i Cravalho, Taye Diggs, Jamie-Lynn Sigler, and John Leguizamo are just some of the guest actors in Season 3 of Elena of Avalor. That's not even the whole crew! It looks like the third season is going to be seriously star-studded.

When the season opens, Princess Elena is the recipient of new magic powers, which reaffirms her dedication to proving herself as a ruler before she becomes the queen of Avalor. But it's not going to be as easy as switching out one tiara for another. She has undergo tests to confirm that she's ready and capable. In the process, she'll cross paths with a whole host of characters.

In one Día de los Muertos-themed episode, which will air in October, Elena comes across characters voiced by Derbez and Diggs. Then in a Hanukkah episode in December, Elena meets a visiting princess from a Latino Jewish kingdom, played by Jamie-Lynn Sigler. The roles for many of the guest stars are still under wraps, but the list of names is impressive enough to spark some excitement even without further details. Melissa Fumero, Stephanie Beatriz, Arturo Castro, Sofia Carson, Kether Donohue, Kate Micucci, Allen Maldonado, Gina Torres, Tovah Feldshuh, Roman Reigns, Anthony Ramos, Andrea Martin, Olga Merediz, and James Monroe Iglehart will all take part in Season 3.

In addition to expanding her social circle, Elena will finally ascend to the throne in the third season. Her special coronation episode airs next year. It sounds like the event will be well-attended, especially if she can get all of her new acquaintances to turn up and celebrate the moment with her. Princess Elena has an exciting new path opening up in front of her, and your kids will be able to join her on it in just a few short weeks. It seems like it'll be fun for the whole family.

Elena of Avalor airs on the Disney Channel, Disney Junior, and is available in the DisneyNOW app.