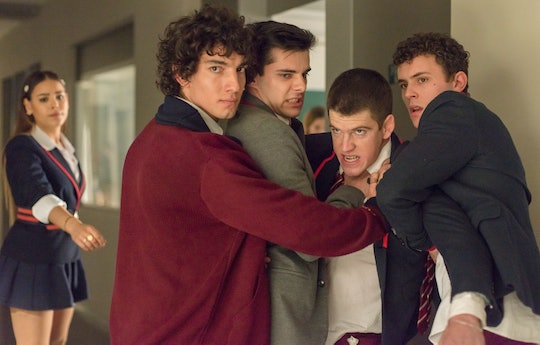 Counting Down The Days Until 'Elite' Comes Back? Same

Elite Season 2 picks up after Marina's murder has been solved with yet another mystery when a student at Las Encinas goes missing. It's poised to be another rollercoaster of a season, but fans may be wondering when Elite Season 3 premieres on Netflix. News of the show's renewal was confirmed by Variety on Aug. 19 at a Season 2 press conference in Madrid, but there's no word yet on when Season 3 is slated to air. An Elite fan account tweeted on Nov. 16 that the series would be returning in 2020, which seems on track for the show. Season 1 premiered in October 2018 and Season 2 is arrives September 2019. My guess is Season 3 will be slated for a fall 2020 release.

Season 2 of the show went into production January 2019, just a few months after its debut season's wildly successful premiere. Elite co-creators Carlos Montero and Darío Madrona had the second season written before Season 1 had even dropped, but it's not clear yet what they may have in mind for Season 3. It's safe to assume another mystery will be afoot as the students of Spain's best and most exclusive high school attempt to mingle with the working class kids transferred in from a neighboring school.

Season 2 will continue the show's conceit of unspooling its narrative via police interrogations and flash-forwards in storytelling. Madrona said it was in intrinsic part of the series which they planned to build upon in subsequent seasons, per Variety, suggesting there will be more police activity to come in Season 3. “We wanted to keep the fast-forward formula as a staple of the series, but at the same time be different,” he explained at the press conference.

Though Netflix infamously keeps its show ratings info under wraps, the streaming service did reveal stats on a few of its landmark series this past January in a report by The Hollywood Reporter. Elite, according to the company's quarterly earnings report, was streamed in over 20 million homes in just the first four weeks after Season 1 premiered last October. Needless to say, the series is a huge boon for Netflix as it continues to expand into developing Spanish language originals. Netflix loves to recycle its teen stars particularly across multiple projects, so it seems like the Spanish actors of the Elite gang might have a potential platform to cross over into American television series, as well.