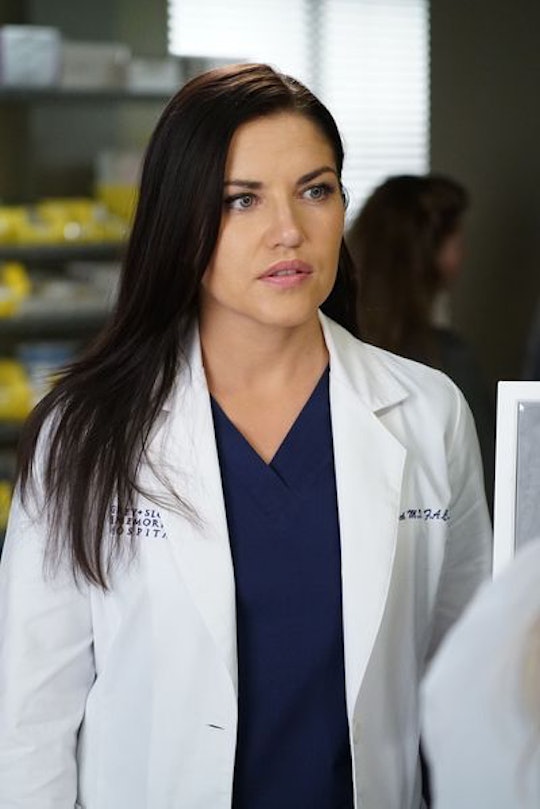 Eliza Minnick Doesn't Have Many Friends On 'Grey's

Season 13 of Grey's Anatomy brought a new doctor to Grey Sloan Memorial Hospital. Dr. Eliza Minnick was hired by Dr. Bailey to change up the residency program at the hospital and most doctors (and fans) are just about ready for her to go ahead and leave already. So when does Eliza Minnick leave Grey's Anatomy? Unfortunately, for those of you that would like her scrub out of the hospital for good, it doesn't look like she's going anywhere any time soon.

In a recent interview with Entertainment Weekly, Marika Dominczyk, who plays the character on the show, said Eliza is actually pushing forward with her teaching in the upcoming episodes. In what Dominczyk referred to as her "next phase of teaching," Eliza plans on getting the residents to do more hands-on work and have the attendings take a step back. Of course, this will be easier said than done, since most of the attendings are on Team Webber. Although the residents definitely like Eliza, they don't really have much authority and if the attendings don't want Eliza in their ORs, it'll be hard for her to make her way in, even with Dr. Bailey backing her up.

It's unclear how Eliza is actually going to find any success in the hospital. The attendings seem pretty set on the fact that they want Eliza gone and for Weber to get his job back. But at the same time, Eliza seems ready to fight and get the job done. Still, even Dominczyk is skeptical about Eliza finding success.

When asked if she thought Eliza could ever win the doctors over, Dominczyk told EW in the same interview that she doesn't think it will ever happen. "Just like with the fans, there's so much history," she said. "I don't know if they would all be like a kumbaya, love Eliza [situation]. She's the type of character that's not for everybody."

At this point, Eliza doesn't seem to be the character for anyone. Besides the residents, the only person who seems to have any kind of feeling for Eliza besides disdain is Arizona. However, Arizona's loyalties to Webber trump any feelings she may have for her potential next love interest, so even her support is pretty non-existent.

While I definitely don't love Eliza, I'm interested to see how this storyline plays out. Will she finally bow out and quit or will she somehow find a way to turn the tide in her favor? Fans will just have to wait and see.