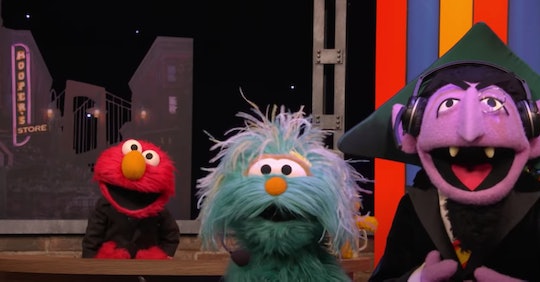 The cast of Sesame Street is about to give Jimmy Kimmel and Stephen Colbert a run for their money when Elmo's talk show airs on HBO Max. The Not Too Late Show with Elmo debuts next month and will feature your kid's favorite red puppet in a format you've never seen him in before.

Starting on Wednesday, May 27, Elmo will interview guests, tell jokes, play games, and have fun with his friends from Sesame Street on The Not Too Late Show with Elmo. The kid-friendly talk show will also feature celebrity interview with the Jonas Brothers, Blake Lively, Lil Nas X, and more.

While families will be able to watch the early evening talk show next month, it's not yet clear how often the episodes will air or if they'll drop all at once. But it's certain that each episode will air at a "not too late" time.

You will, of course, need an HBO Max subscription to watch it. HBO and WarnerMedia's new streaming service will cost $14.99 a month and include every single episode of every HBO show, as well as new programs, like the kid's craft competition show, Craftopia. Subscribers will have access to Sesame Street's collection of episodes over the past 50 years, in addition to watching brand new episodes of the show as they air before they air on PBS Kids.

You can look forward to a lot more content from Elmo and his friends when HBO Max debuts in late May.