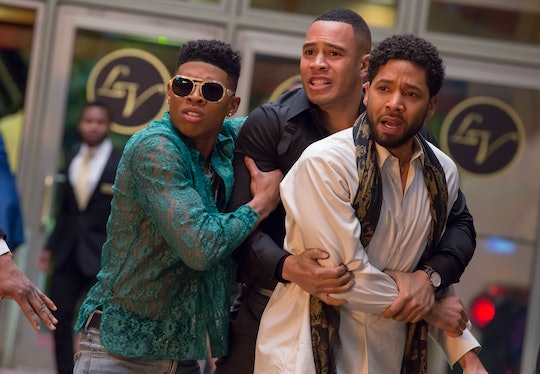 This season of Empire is, sadly, coming to an end. It started with a shock as Anika killed Rhonda (yes, it feels like forever ago, but that was the beginning of this season!) and ends in the aftermath of Bella getting kidnapped and Leah stabbing Tariq. In true Empire fashion, it's unlikely that all the plotlines will be solved by the end of Wednesday's finale, "Toil and Trouble Part 2." Thankfully, the series will definitely return for another season, so fans don't have to worry. But when does Empire Season 4 premiere? Hopefully the audience won't have to wait too long for more Lyon drama.

Empire's fourth season was announced all the way back in January. FOX dropped the announcement during the network's Television Critics Association press tour, noting that Empire is the top drama in the 18-49 age demographic, which it's claimed since the show began. That means that fans are sticking with the show and it continues to thrive. There is one change that FOX made to the show: its airtime. Vulture reported that the network moved it up from it's 9 p.m. slot on Wednesdays to 8 p.m. instead. So fans can look forward to getting their Empire fix a little earlier when it comes back in the fall.

But when exactly can viewers expect Empire to return? As of now, FOX hasn't released the Season 4 premiere date. Viewers can look back at previous seasons, though, to get an idea about when it will come back. While Season 1 had a spring premiere date, Season 2 and Season 3 both began in the fall, having premiere dates in late September. Season 4 will have 18 episodes, which is too many just to air in the spring — and it's the same amount of episodes the past two seasons have had. It's likely, then, that new episodes will begin around the same time this September.

While it doesn't appear to be set yet, Empire fans will likely see the next season of Lyon antics sooner rather than later. Considering the line-up of guest stars – including Demi Moore, whose character premieres in the Season 3 finale – and the inevitable cliffhangers, FOX will probably follow the pattern in terms of a fall start date. Viewers will even be able to see it an hour earlier now. For now, though, they can enjoy the summer — but know Empire will be returning to their screens in no time.

More Like This
Take An Exclusive Sneak Peek At 'Bluey' Season 3 Before It Lands On Disney+
The White Lotus Is The Perfect Thrilling Treat For After The Kids Go To Bed
The Worst Fake Babies In The History Of Movies & TV That Will Always Be Unsettling
10 Cozy, Romantic, & Drama-Filled Shows To Watch If You Love 'Virgin River'