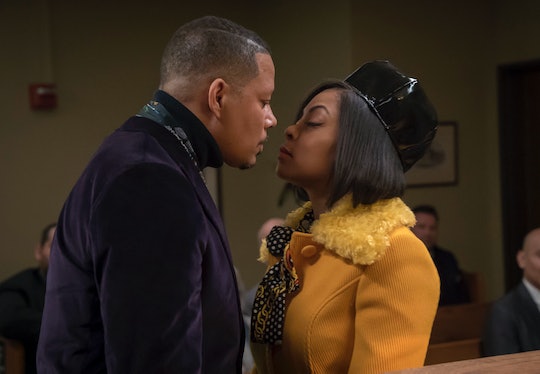 When Will 'Empire' Be Back With Season 5?

It's been another crazy season of Empire and now the musical drama is coming to a close. For now, anyway. Thankfully, this isn't the end of the road for the hit series. Its already been renewed for Season 5 so the only things fans want to know now is when does Empire Season 5 premiere?

Besides the first season, which began at the mid-season point, every season of Empire has premiered at the end of September, so we can likely expect the same for Season 5. If the show continues to air on Wednesday nights when it returns, the premiere will probably air on Sept. 26, but a date hasn't been announced yet so that's not guaranteed. To make sure you don't miss it, it's best to just keep an eye on Empire's social media pages for a premiere date, which most likely won't be announced until the end of summer or early fall.

Until then, fans still have the Season 4 finale to look forward to and it looks like it will be a crazy one -- so you definitely don't want to miss it! Just when it seemed like the Lyons were finally going to take Empire back, Giselle and Eddie showed up at the family mansion to reveal that if the Lyons go through with their bid on Empire they'll tell the police that Lucious killed Shyne. Even worse? They've got the bloody scarf to prove it. Yikes!

Now with this ultimatum on the table, Lucious will have to decide what's more important: the company or his freedom. Based on the preview for the finale, it looks like he'll choose the company. This feels very reminiscent to the very start of Empire, in which Cookie went to jail for Lucious so he could start his company. Perhaps, that's exactly what Lucious is thinking.

It also looks like the show may be coming full circle in more ways than one, because Lucious can also seen getting down on bended knee in front of Cookie. Apparently, before the finale ends Lucious will pop the question, but will Cookie say yes? It's hard to say. The pair have only grown closer and closer over the course of the season, and truthfully the proposal isn't really a surprise. This is especially true because if they're married, neither Cookie nor Lucious could be forced to testify against the other. This would obviously come in handy right now. In fact, it wouldn't be surprising if that was partially why Lucious decides to propose.

Still, that doesn't necessarily mean Cookie will say yes. Sure, she and Lucious have grown close again, but are they really ready to be married... again? Obviously Lucious thinks so, but Cookie may not feel the same. You'll just have to watch the finale to find out what she decides. Hopefully, the season won't end before viewers learn her answer.

Besides Cookie and Lucious' possible nuptials, the preview for the finale also shows Tiana dropping a major bomb. Apparently, she's pregnant, which of course begs the question: is Hakeem the father? Based on the fact that his girlfriend, Haven, just left he because she believes he's still in love with Tiana, it's probably fair to guess Hakeem would be fine if the baby was his. In fact, he may even be happy about it. Could this mean these two are finally going to get back together? It definitely seems likely, which will make a number of fans who have shipped this couple since Season 1 very happy.

Thus, there's a lot to look forward to heading into the finale, and fans will definitely want to watch this live. You can catch the Season 4 finale of Empire on Wednesday at 8 p.m. EST on FOX.