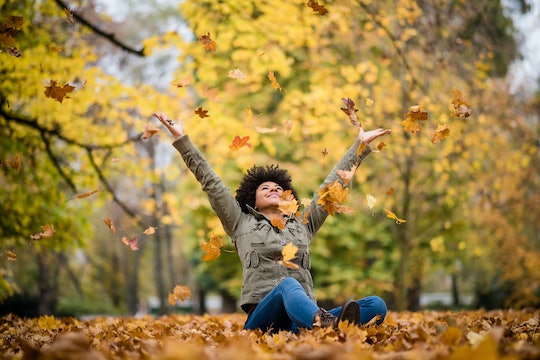 If You Can't Wait For Sweater Weather, Fall Is Just Around The Corner

The dog days of summer are almost over, and you know what the means — sweater weather, leaf peeping, and other fall favorites are just around the corner. As someone who can't stand summer heat or sweating, I couldn't be more excited about the change of seasons. So exactly when does fall 2018 start? This year, it begins on September 22.

Fall is probably my favorite time of year, and it looks like I'm in the majority. A YouGov survey found that 29 percent of Americans say fall is the best season. There might actually be a scientific reason why so many people are counting down the days until autumn arrives, and no, it's not due to the availability of pumpkin spice lattes. According to HuffPost, it probably has something to do with starting a new school year. Sociologist Kathryn Lively told the site that our minds may have become conditioned to find the fall exciting, since it brings the prospect of reuniting with school friends, starting a new experience, and of course, loading up on brand new clothes and school supplies (I personally could spend hours in the back to school section at Target and get way too excited about 25 cent crayon deals).

The first day of fall also brings the start of shorter days and longer nights. The Farmer's Almanac noted that days and nights in the beginning of fall are roughly the same length of about 12 hours each. Each day gets a little shorter as the season goes on and the nights get a little longer. That process gets a bit of a boost from the end of Daylight Saving Time. According to Time and Date, "fall back" is on November 4 this year, so don't forget to set your clocks back (and check your smoke alarms while you're at it, according to the Consumer Product Safety Commission).

The longer, cooler nights of the season are perfect for staying in and lounging on the couch in my opinion, and that might be why TV networks typically launch their new shows and season premieres in the fall. This year's fall line-up seems especially packed. Esquire noted that mega-tearjerker This Is Us comes back on September 25. The Big Bang Theory is hoping to go out with a bang as it begins its final season on September 24. And I'll definitely be parked in front of my TV on September 27, when The Good Place, Grey's Anatomy, and How to Get Away with Murder all debut.

There are also some awesome holidays to look forward to in the fall. You might already be seeing Halloween costumes and candy taking over stores, and they'll quickly be followed by Thanksgiving decor. Heads up, the fall feast arrives on November 22 this year.

Of course, if you're reading this from the Southern Hemisphere, you've got a different season to look forward to. For those living south of the equator in places like South America, Australia, New Zealand, and southern Africa, September brings the spring according to Time and Date. So for those Americans who are cold-averse, you know which direction to head in for your next vacation.