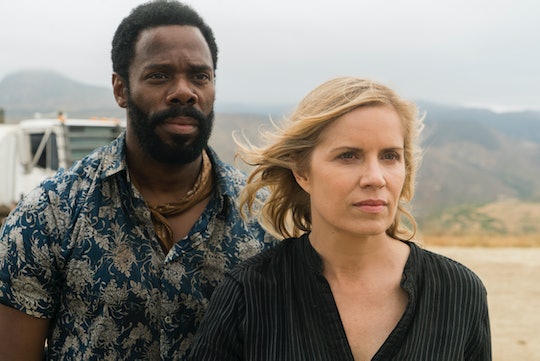 Fear Not, The Future Of 'Fear The Walking Dead' Is Already Secure

Now that Season 3 is coming to a close this Sunday, it means one long wait between now and when Fear The Walking Dead Season 4 premieres. Although waiting makes us even more anxious than knowing that walkers are just around the next bend, the good news is that Fear The Walking Dead has been renewed for a fourth season by the network itself, so it's definitely coming, which is awesome.

When it's returning, though, is an entirely different story. The show's first season was a short one and premiered in late August 2015 and ended that October. Season 2, which had a total of 15 episodes, premiered in April 2016 and also ended in October of that year, whereas Season 3 premiered in June 2017 and is ending this month. There's no set premiere date but judging from the pattern, it will likely end in October next year. When it premieres is an entirely different story, but I would mark your calendars anywhere from late spring to early summer. That's not much help is it?

You might want to shoot for a later premiere date if you're the kind of person who likes to place bets, since there are a ton of shakeups happening behind the scenes that could take some extra transition time.

Fear The Walking Dead co-creator Dave Erickson is stepping down as the showrunner and the position has been filled by Andrew Chambliss and Ian Golberg, who were both producers and writers on Once Upon A Time. Chambliss was also a writer on The Vampire Diaries and Spartacus, while Goldberg created Dead of Summer — so there shouldn't be too many big changes in store as these guys know what genre and cult-y shows are all about.

If you are a little nervous about the change in showrunners, rest assured. Scott Gimple is joining the crew as an executive producer after working in The WalkingDead since its inception. So there are a lot of fans in the house even behind the scenes. Actually, who knows if its Gimple's doing or not, but just before the Season 3 finale, the network announced that Fear The Walking Dead Season 4 will include a long awaited crossover with The Walking Dead. Writer Robert Kirkman revealed at New York City's Comic Con that it was in the works, but he was pretty mysterious about it.

Uh, yea it is! Since he mentioned it, fans have been going wild with theories about who it could be. And they might have cracked the case. The Walking Dead's Michael Cudlitz, who played the now deceased Abraham Ford, tweeted the other day, "Crazy sh*t is about to go down. See y'all on the other side." That led many to think that he might be the crossover character.

You might remember that Abraham died in the Season 7 premiere of The Walking Dead, but its sister show isn't taking place at the same time. Abraham had mentioned that he was in Texas before joining the crew in The Walking Dead, which is pretty close to Mexico, where the Fear The Walking Dead group has been. As they make their way up North, it's entirely possible they run into Abraham.

Then again, Kirkman did not name any names at all, and Cudlitz could have very well been tweeting about something else. With The Walking Dead premiering on Oct. 22, there could very well be a crossover in Season 8, too. Seriously, anything is possible in this universe. If anything, fans should just be happy that both Fear The Walking Dead and the original keep on coming.