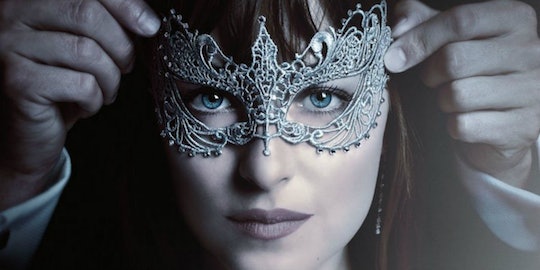 When Does 'Fifty Shades Darker' Come Out? Consider This Special Holiday Booked

Believe it or not, it has been close to a year and a half since the first installment of the Fifty Shades trilogy of films was released. Fifty Shades of Grey was a mega-success in the box offices, and fans of the books weren't complaining either. The only issue that movie-goers probably had was the fact that they had to wait so damn long for the first film's successor to come out. So, when does Fifty Shades Darker come out? Get your calendars out and "X" out this special holiday, because you're officially booked.

If you were one of the naysayers of the first film — or perhaps you were turning your nose up at the book series — allow the numbers to speak for themselves. According to Forbes, Fifty Shades of Grey made "$166m in North America but a whopping $571m worldwide on a $40m budget." At the risk of sounding obvious, that is a huge success. So, no matter what your opinion is on sexy movies like this is, there's no doubt that this next film is being awaited with bated breathe.

The second film will pick up where Fifty Shades of Grey left off — just after that momentous elevator goodbye. Will Christian and Ana get back together? The answer is out there — hello, this book series was hugely successful — but this is a spoiler free zone, except when it comes to release dates.

If you like to plan ahead, you can mark yourself "busy" on Feb. 10, 2017 (Valentine's Day weekend, you'll notice), which is when Fifty Shades Darker is set to release. Much like its predecessor, the film will be released on arguably one of the sexier weekends of the year. It goes with the theme, so just indulge the studio, OK?

The movie isn't without its hiccups. In March of 2015, the first film's director, Sam Taylor-Johnson, departed from the franchise. Niall Leonard, E.L. James' husband, was brought in to write the film, another change from the first film. It was also announced that the second film would be "more of a thriller" according to an interview Universal's Donna Langley gave The Hollywood Reporter.

Regardless of internal shake-ups, there is no doubt that the interest in the film will be enormous. So, maybe prepare to arrange your calendar around its release? You'll certainly need some breathing time to recoup after this hits the big screen.