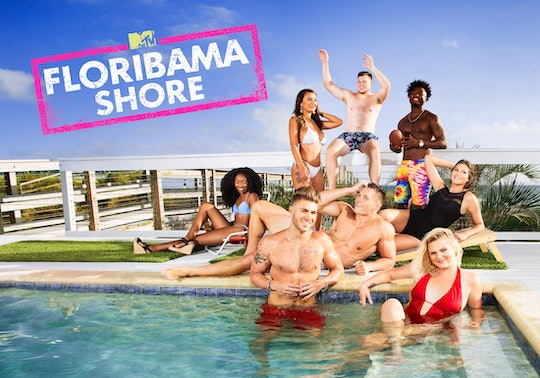 'Floribama Shore' Is Coming Back For More Drama

I don't know if MTV realized that they'd stumbled upon something magical when they premiered Jersey Shore way back in 2009, but they certainly did. So much that they premiered a spinoff in November of 2017, Floribama Shore. The show did so well that the network is bringing back all the shenanigans for a second installment. So when does Floribama Shore Season 2 premiere? Get ready to see your new favorite gang of youthful miscreants back on TV screens before you know it for some more fun in the sun.

Jersey Shore ended its final season in 2012 when it was the highest rated series in MTV's history. So it was only natural that MTV decided to revive the series as a spinoff, this time gathering a group of people for a summer in Florida's Panama City Beach. Eight young adults, Gus, Nilsa, Codi, Candace, Jeremiah, Kortni, Kirk, and Aimee, gathered in their very own beach house, complete with a "gator phone," a clear call-back to Jersey Shore's "duck phone" to forge friendships, stir up mischief, and get very, very drunk in front of cameras. Each cast-member has a personality just as strong as any from the original series, and the result was a highly entertaining mess that definitely resonated with viewers.

Deadline reports that Floribama Shore enjoyed strong ratings for MTV. It was the number one original cable series in its time period of Monday nights at 10 p.m. EST. It was also the network's highest rated new series premiere in over three years. "The current season is averaging a 1.43 rating in Live + 3 among adults P18-34 and has helped MTV notch two consecutive quarters of year-to-year ratings growth," the outlet stated. Deadline also pointed out that the show had gained a foothold in pop culture, just as its parent show did. It even got a spoof on Saturday Night Live after just a few episodes.

The season finale was titled "Snuggle Puddle," in which the housemates' families came to visit. The cast also took the opportunity to settle their differences, reflect on their summer, and reinforce their friendships by throwing all of their bedding onto the floor for a "snuggle puddle" mass sleepover. Kortni recapped her time on the show thus: "I blacked out, I acted out, I got ratchet, and I definitely want to do this again." Luckily, it looks like she'll get another opportunity to do it all over again when the show airs its second season in the summer of 2018.

While the first season was only 8 episodes long, the show has performed so well that it is getting a full 20 episodes for Season 2. Personally, I don't know if I can actually handle 20 episodes of these antics. But I am a consummate professional, so I will proceed to watch several weeks of what occasionally feels like a recap of my rowdiest college moments. Sorry, mom.

And in case you were worried about the original Jersey Shore crew, never fear. That series is also getting a reboot. That's right folks. Deena, Pauly D, JWOWW, Vinny, Ronnie, Snookie, and The Situation are coming back for a revival of the series that made them famous, called Jersey Shore: Family Vacation. That series will also premiere sometime in 2018.

And if all these Shore premieres aren't enough, you can always satisfy your cravings by perusing some of the series' international spinoffs, including the U.K.'s Geordie Shore, Poland's Warsaw Shore, Spain's Gandia Shore, or Mexico's Acapulco Shore. It seems nobody can get enough of highly coiffed 20-somethings behaving badly. At least, I know I can't.