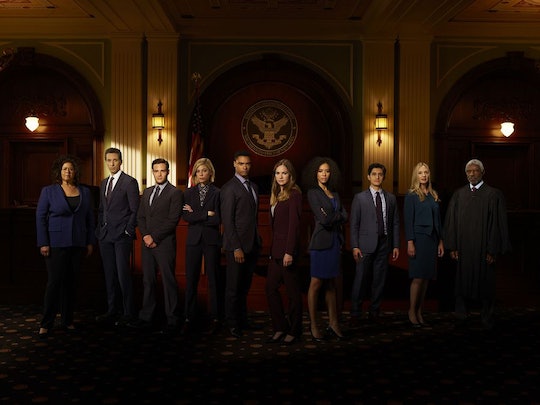 Find Out When 'For The People' Returns For Season 2

Although For the People doesn't air on Thursdays it's still a Shondaland drama, which is why it shouldn't be surprising that the show has gained quite a following. With the first season now coming to an end, fans are already wondering what's next for the court room drama. Specifically, when does For the People Season 2 premiere?

Thankfully, the series has already been renewed for a second season. Unfortunately, it's not currently on ABC's fall schedule, but it's also not listed as premiering during the midseason, as it did for it's first season. So fans probably won't have to wait until 2019 to see what happens next on the drama series, but the new season certainly won't be premiering anytime soon. Until then, we're also waiting to hear about premiere dates for the other Shondland shows that were renewed for the "Thank God It's Thursday" line-up. Those shows include Grey's Anatomy, Station 19 -- which replaced Scandal in the 9 p.m. EST time slot -- and How to Get Away with Murder.

For the People stars Britt Robertson as Sandra Bell, one of the main characters that was recast after the show was ordered to series. The other recast role was for Allison Adams, who is now played by Jasmin Savoy Brown. The show's cast also includes Hope Davis, Ben Shenkman, Susannah Flood, Wesam Keesh, Regé-Jean Page, Ben Rappaport, Anna Deavere Smith, and Vondie Curtis-Hall.

If you haven't had a chance to watch For the People yet, the series follows a group of young attorneys on either side of the aisle in the Southern District of New York (SDNY) Federal Court, also known as "The Mother Court." The new lawyers work for both the defense and the prosecution, often butting heads as they fight on either side of high profile and high stakes cases. As is the case for most Shondaland drama, they also have to deal with the intertwining of their personal lives.

Over the course of the show's first season, fans watched as the characters took risks and occasionally crossed the line as they did their very best to help their clients and also shine as good attorneys. Fans have also watched as the characters hooked up with each other, and witnessed how their romantic lives sometimes (ahem, often) get in the way of their own professional goals.

In the season finale, each of the characters will be facing some tough calls in their personal and professional lives. That means fans should probably prepare for some kind of cliffhanger at the end of the episode, leading into an exciting second season. During the finale, Sandra will take on a case defending a hydrologist accused of spying for the Chinese government, but the similarities between this case and one she lost in the past will shake her confidence. Based on the promo, it looks like she'll even try to move away from a jury decision and instead let the judge decide the case, something all lawyers know is a very risky move.

Meanwhile, Jay (Keesh) will try to become more confident and by going up against Kate (Flood) in a case involving a PTA president accused of selling drugs to students. Allison will get caught up in a love triangle, leaving her to decide who she really wants to be with. Meanwhile, Leonard (Page) will reach out to Kate for advice on a major decision that will lead to a surprising confession. Thus, it looks like the finale will be a major episode, and possibly even a game changer for a number of characters! It'll be interesting to see how everything ends up playing out as the first season comes to an end.

This article was originally published on May 21, 2018