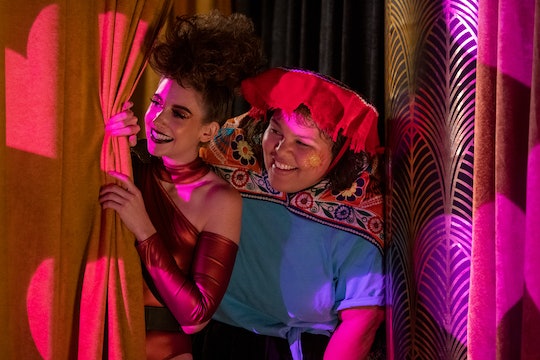 'GLOW' Leaves The Door Open For A Hopeful Fourth Season

If you've already burned through GLOW Season 3, which premiered on Netflix Aug. 9, then you're probably dying to know when GLOW Season 4 premieres. Since the series just nabbed two more Emmy nominations this year (the second for Betty Gilpin as Debbie Eagan), I think it's safe to assume that GLOW will indeed return for a fourth season, although no renewal has officially been announced yet.

In seasons past, GLOW typically dropped on Netflix earlier in the summer; Season 1 released on Jun. 23, 2017, and Season 2 released on Jun. 29, 2018. Although there's no confirmed reason behind the Season 3 delay, some have speculated that it was due to production relocating from Los Angeles to Las Vegas. In any case, renewal news for GLOW has typically come in August, but since Season 3 was released about six weeks later than it has in the past, it may be a while before news of a Season 4 pick-up is announced.

Taking into account GLOW's capacity for bringing in Emmy nominations, it seems extremely unlikely that Netflix wouldn't allow creators Liz Flahive and Carly Mensch to end the show on their own terms. Typically in cases like these, the announcement of a show's final season comes as part of its renewal announcement, making clear that production has plotted out a satisfying conclusion. It's likely that if and when GLOW does get its final season, fans will know ahead of time, rather than getting a surprise cancellation between seasons.

Joining the cast for Season 3 is Geena Davis, who plays a former showgirl turned hotelier named Sandy Devereaux St. Clair. Sandy owns the Fan-Tan Hotel and Casino, the Las Vegas venue where GLOW now performs, and, as an ex-Vegas performer, she's intimately familiar with the challenges the ladies face. But as the hotel's entertainment director, she's also interested in making money, so she extends GLOW's contract for an entire year, despite many of the women being unhappy with their new gig.

Debbie continues to struggle with feelings of maternal ineptitude this season, especially as she continues chasing a producer credit, trying to seize more creative control over her career. In one scene, as Bash reminds the trio of GLOW producers that they stand to make a lot of money off the show in Vegas, Debbie retorts, "Maybe I can push the money into a pile the shape of my son."

Needless to say, the show doesn't shy away from its central theme of exploring women's barriers to career-building. Ruth also gets a bit more space to explore her connection with Sam in Season 3, which opens up some potentially exciting storylines for the show in Season 4. But for now, fans will have to wait for more news from Netflix.