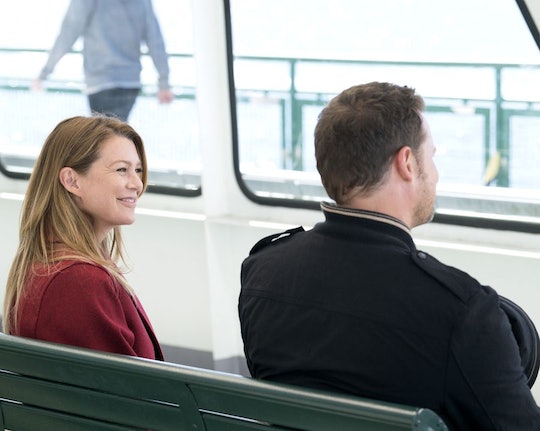 'Grey's Anatomy' Is Taking A Break For The Holidays

After last week's nostalgia-filled episode, Thursday's episode of Grey's Anatomy will be a bit different. The hospital's computer system gets hacked, leading to the doctors having to think of creative ways to do their jobs and keep their patients alive. To make things more high stakes, this is also the season's midseason finale. So when does Grey's Anatomy return from winter hiatus?

Update: Shortly after this article was published, ABC announced that Grey's would return on Thursday, Jan. 18.

Earlier: There isn't an official return date just yet, but based on past seasons, fans can probably expect the show to come back in either late January or early February. The return of Grey's will also bring the return of the Thank God It's Thursday (TGIT) line-up, as both Scandal and How to Get Away with Murder are also having their winter finales this week as well. Additionally, Winter 2018 will also mark the start of the newest Grey's spin-off, which doesn't have a title yet, as well as Shonda Rhimes' other new show, For the People.

The Grey's spin-off will follow Ben Warren (Jason George) as he pursues his new career as a firefighter. Still set in Seattle, the show will center around the city's firefighters as they deal with their own set of personal and professional obstacles. The 300th episode showed Ben finally reveal his new career plan to Dr. Bailey, who was not happy about it all. Most likely, the midseason finale will show Ben continuing to prepare for his new job.

As for where the other characters end up at the end of the episode, it's difficult to say. Even though Meredith just won the Harper Avery Award, she's still Meredith Grey, which means she'll be hard at work on her next big endeavor, as will the other doctors. However, this episode will feel a bit different than other finale episodes of Grey's. Co-showrunner Krista Vernoff told TVLine the episode will be like an "edge-of-your-seat action movie."

Kevin McKidd, who plays Owen Hunt and directed the episode, also described the hour as "kind of like Speed [without] the bus. It's a moving freight train, and then it hits this point at the end of the episode where you're like, 'What's going to happen? It really is a classic and beautifully done cliffhanger episode."

Besides the hacking of the hospital's systems, there are a lot of things that could wrong and end on a cliffhanger. First, there's the love triangle that has now appeared between Arizona, Owen, and DeLuca's sister, Carina. At first, Carina was very smitten with Arizona but she has quickly moved on to Owen. Or maybe, she's just interested in them both. As for her little brother, his ex-girlfriend Sam has returned, and though they both agree they're terrible for each other, that hasn't stopped them from hooking up all over the hospital. Will the midseason finale give more insight into their messy past?

Lastly, in the episode prior to the 300th, Jo decided she was going to file for divorce from her husband. It was revealed earlier this year that Matthew Morrison, who plays her abusive husband, would be back for this season. Could the midseason finale be when he appears? It would be a terrible time for him to show up with the hospital being in the middle of a cyber attack and probably less secure than it normally is. Then again, based on the preview, the hospital will be crawling with FBI agents so who knows? No matter what, Jo's ex making a reappearance won't be good for anyone.

You can find out how Grey's leaves off before the hiatus by watching the new episode tonight at 8 p.m. EST on ABC.