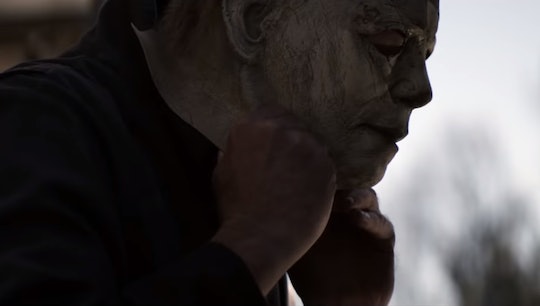 The First Trailer For The 'Halloween' Reboot Is Here & It's Haunting

It's been a long decade of movie sequels, reboots, and "reimaginings," and many a film fan has lamented the lack of fresh ideas coming out of Hollywood. I'm with you, I swear, but believe it or not, there's one more reboot that the world actually needed, because Michael Myers has been done dirty for way too long. And when does the Halloween reboot come out? You guessed it, October. The 19th, to be precise, which gives fans two full weekends to take it in before the big night. And trust me, you want to see it.

Before you close your browser, let me assure you that I'm on your side. Yes, there are too many Halloween movies already. Yes, it has been rebooted more than once already. But as each incoming team of writers and directors tried to right the ship, they ended up making an even bigger mess of things than their predecessors, like when your toddler tried to clean up a spill. You're just wiping Michael Myers all over the place, guys! Oh, no, now you've got him ground into the carpet! We'll never get him out! Finally, though, it seems like the right combination of creativity and passion for the original film has been assembled, and they're starting by straight-up erasing all the other versions. Check out the trailer:

The new Halloween was directed by David Gordon Green, and co-written by Green and Danny McBride, according to Forbes. Yes, that Danny McBride, the guy from Pineapple Express and Eastbound and Down. It may seem odd, but sometimes, handing the reigns of a franchise over to someone who grew up with it is the best course of action. To wit: the Star Wars prequels, by original creator George Lucas, versus The Force Awakens and The Last Jedi, written and directed by J.J. Abrams and Rian Johnson, respectively. Sure, the Canto Bight subplot was way too long and unnecessary, but compared to Jar Jar Binks and Anakin's "romantic" musings about sand, I'll take a whole dang trilogy about a space casino (as long as Lando's in it).

Or if you're not into Star Wars, you weirdo, how about The Muppets? After the death of Jim Henson in 1990, our favorite furry friends were forced to reenact classic literature for two films, and then came the ultimate betrayal: Muppets From Space, which featured no singing (what?!) and made the terrible, offensive assertion that Gonzo was not a "whatever," as we'd always known him to be, but an alien. It seemed like all was lost until Jason Segel stepped in and made things right again. "We set out to make a Muppet movie that harkened back to the late-'70s, early-'80s Muppets that we grew up with," he told NPR in 2012. "I had the opportunity to work with my childhood idols, and I wasn't going to take 'no' for an answer. So I set out to make that happen." Unfortunately, Segal didn't stay on board for Muppets Most Wanted and that bizzare puppety ripoff of The Office.

John Carpenter returned to the franchise he created after a long hiatus, but he mostly kept his hands off, according to Billboard, serving as an executive producer and composing the score for the new Halloween, which will heretofore serve as the only sequel to the original 1978 film. That means you can forget everything that happened in Halloween II, most notably, the twist that Michael and the original protagonist, Laurie Strode (Jamie Lee Curtis), are siblings. Halloween III: Season of the Witch was completely unrelated to the first two — Michael wasn't even in it — so don't worry about that.

It also erases the existence of Jamie Lloyd, Laurie's daughter, who was the protagonist in the next three movies, and of course, scraps Laurie's death, which occurred sometime between the second and fourth films. That's actually been done before; Halloween H20: 20 Years Later was an "alternate timeline" in which the Jamie Lloyd movies never happened, but the sequel to that one, Halloween: Resurrection, killed Laurie again, so those are out, too. And it goes without saying that the 2007 and 2009 Rob Zombie reboots are now null and void, which should be a relief to any true horror fan. Think back to just the first movie. It was scary! It was pretty good! Now picture it with today's special effects technology, and twice the budget. This is going to be good. Finally.