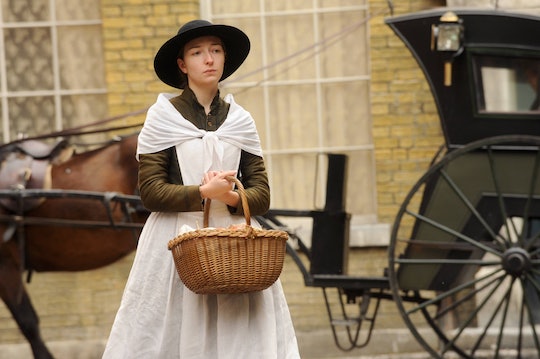 The Fate Of Hulu's 'Harlots' Has Yet To Be Revealed

Hulu's period drama, Harlots, didn't receive the same level of critical acclaim as Hulu's other new original series, The Handmaid's Tale, but it still successfully found a fanbase. Those fans, who have absolutely loved the show's first season, are now wondering when does Harlots return for Season 2? Unfortunately, it hasn't been renewed for a second season thus far, but that doesn't mean it won't be.

Though the show has yet to be renewed, the cast would certainly love to continue on with the show. Samantha Morton, who plays Margaret, a brothel owner and mother to two daughters, told Radio Times she'd be "thrilled" to continue playing the character. "Only if people want that, if people respond," she said. "You don't want to do something for the sake of it, you should do it if there's a need, or a want."

Well, there's definitely a want. Fans have been sucked into the world of the show, which takes place in 18th century London, and the characters' stories. Along with Margaret, the show also revolves around her daughters Charlotte (Jessica Brown Findlay) and Lucy (Eloise Smyth), as well as Margaret's evil rival Lydia Quigley (Lesly Manville).

The show is filled with an excellent dose of drama that centers around family, loyalty, and prostitution. More than that, the series has been praised for being centered mainly around women and having women as the anti-heroes of the series. While Harlots is focused on prostitution, it's also a series about female empowerment, during an era in which women had very little rights. It looks at the different levels of women's sexuality, because while the characters may be "selling themselves," they're also often given the agency to make decisions on their own terms.

If you're not sucked in by the plot or the amazing cast and their incredible acting capabilities, you may just get hooked on the characters' amazing quips. Filled with innuendos and biting retorts, this show has a dry humor that will actually make you laugh out loud. Hopefully fans will get to see more of just that if a second season does come to pass.