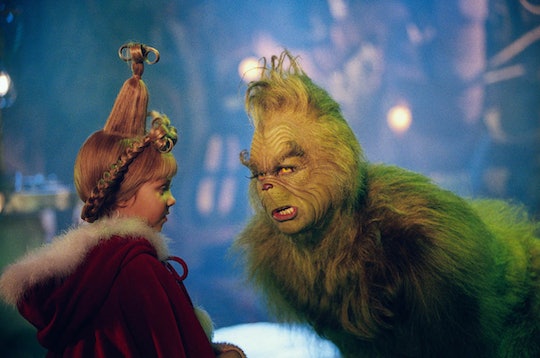 When Does 'How The Grinch Stole Christmas' Air? It's A Holiday Movie Must-See

Even the most anti-Christmas person you know can appreciate the classics when it comes to holiday movies, and whether that classic is something like It's a Wonderful Life or something more contemporary like Elf, there is a Christmas movie for everyone. But you just can't beat the classics, so when does Dr. Seuss' How The Grinch Stole Christmas air? There might be a long-standing debate about which one — the original cartoon movie or the live-action Jim Carrey-helmed one — is better, but at the heart of them both, they're Christmas movies with the same message of enjoying your roast beast and appreciating the fact that you don't have to spend a fortune on hairspray to make your hair stand up like that if you're a resident of Whoville.

The countdown to Christmas has officially begun for most of those who refuse to even entertain the idea of the holiday until after they've passed their Thanksgiving meal, so now you know that it's really crunch time. That being said, this is the time for holiday movies to air pretty much every night on any given channel, so you're bound to catch some version of How The Grinch Stole Christmas between November and Christmas day, right?

So when does How The Grinch Stole Christmas air? There are surprisingly not too many showtime options this year, as NBC aired theirs on Friday, November 25 and TBS will air the cartoon version on Dec. 10 at 7:30 p.m. (ET). But it doesn't really feel right to have a Christmas season without lots of showtimes for this holiday classic. At least on the Freeform 25 Days of Christmas special, you would expect one of the movies to be part of the lineup, but this year, that isn't the case.

For some, nothing beats the original and while I admit that I'm a bit spoiled by all of the HD and computer animated cartoons of today, I can still appreciate the desire for the nostalgia of the original Grinch. As I mentioned, the cartoon movie is set to air on TBS on Friday, Dec. 10, but how can you watch the live-action version of How The Grinch Stole Christmas?

Believe it or not, it isn't available for streaming on Netflix in the U.S., but if you happen to be in Canada, Belgium, Netherlands, France, Switzerland, Italy, or Spain, then Netflix has the movie available for streaming. You can also find a few versions of the cartoon movie on YouTube, but those don't always remain available for too long. It might not seem like Christmas without several doses of both the live-action and cartoon versions of How The Grinch Stole Christmas, but apparently with newer classics like Elf in rotation, that's where it's at now. Not that I'm complaining, because Elf is an easy favorite, but it doesn't make it any less shocking to have so little of the guy with a heart three sizes too small.