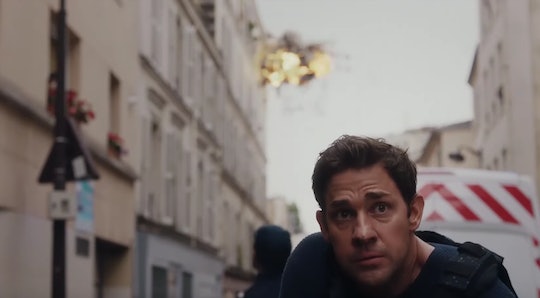 Binge-watching television shows should be considered to be a job, because people take it very seriously. But how could you not? From the plot lines that suck you in, to the characters that seem real, television series have a way of pulling you in and keeping you there. During the Super Bowl, audience members will be introduced to a new Amazon series, Jack Ryan, during a commercial that people probably won't forget. But when exactly does Jack Ryan come out so you can queue it up for your next binge-session? Be patient because the series will take over your life soon enough.

First, let's talk about that amazing commercial. This is Amazon Prime Video's first ever commercial to air in the Super Bowl (which is a little hard to believe), according to Ad Age, and they nailed it. The commercial shows images of Washington D.C., soldiers, and a very handsome John Krasinski in various situations (mostly while carrying a gun) all to the sound of different presidents giving speeches. A lot of action, romance, and sadness is packed into the 59-second long commercial (seriously, how did they do that?), only teasing audience members with what is to come from the series.

But people shouldn't rush to their Amazon Video accounts just yet, because Jack Ryan won't premiere until Labor Day weekend (that's Aug. 31), according to Entertainment Weekly. In the meantime, you can watch the trailer for the series over and over again until it finally premieres later this year.

If you were a little unclear about what the series is about (other than the fact that it gives some major House of Cards feels), the show's summary paints a clearer picture. The show, according to Collider, follows Jack Ryan (played by other binge-able Netflix series, The Office's John Krasinski in a role far from Jim Halpert) as an up-and-coming CIA analyst, who is put into a "dangerous field assignment that brings him face to face with ISIS." Not only is this plot incredibly timely, but shows a side of war and the CIA that people might not be familiar with. Based on the trailer alone, you can tell that the show will be a thrilling adventure.

But if the character of Jack Ryan sounds a little familiar, it is because Ryan is the main character of a book series written by Tom Clancy, which debuted in 1984. Ryan has also been the subject of tons of movies starring some of your favorite actors (he's been portrayed by Alec Baldwin, Harrison Ford, and Ben Affleck, according to IndieWire) but Amazon's Jack Ryan is going to be a little different than these portrayals. Unlike the movies and books, according to Variety, Jack Ryan will have an all new, original story line, while still maintaining the fan favorite characters from the series that people know and love.

The series' director and executive producer, Daniel Sackheim gave some insight into this reboot, telling IndieWire in July:

Krasinski, who charmed audiences in The Office as an every day paper salesman for fictional paper company, Dunder Mifflin, is definitely an everyman — and it is clear from the Jack Ryan trailer that he has the hero thing down.

Judging by the trailer, both binge-watchers and fans of Clancy's books and the titular character will be able to enjoy the new Amazon Prime Video series, when it does eventually come out later this year. Thankfully there are plenty of other series out there to binge-watch until that time comes.