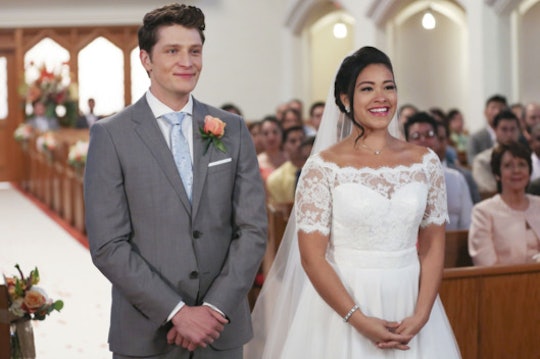 When Does 'Jane The Virgin' Come Back? 4 Things That Need Answers

As fall begins to bloom and the days start to get cooler, there's one thing we can all finally start to get excited about and no, I don't mean pumpkin spice lattes. I'm talking about our favorite fall shows. Finally after waiting what feels like forever, our favorite shows have finally returned to our TV screens, although some are returning a bit later than others. Fans of Jane the Virgin have had to wait a little bit longer to be reunited with our favorite Villanueva's. So when will Jane the Virgin come back? The show's third season will premiere on Oct. 17 at 9 p.m. EST on the CW and that day can't come soon enough.

The Season 2 finale left us with some many questions and almost no answers. As this show tends to do. Let us not forget that this is technically a soap opera. So, if there's no cliffhanger, there's definitely something wrong. So, what can we expect when the show returns this month? Here's just a few questions we hope will be answered in Season 3.

Just as Jane was (finally!) going to lose her virginity to Michael he went out to get them some ice and ran right into his partner, Susanna. After he said her supposed alma mater's saying, "Roll tide," and Susanna not understanding it Michael put two and two together and realized that Susanna was the mole. Unfortunately for Michael, Susanna, who it was revealed is really Rose, aka Sin Rostro, couldn't let Michael get away with that information and shot him in the chest. So does Michael survive? It seems unlikely that he could survive a bullet wound straight to the chest but this is TV after all so maybe he makes it. We'll just have to wait and see what's in store for his and Jane's future.

Does Luisa Run Off With Rose?

From the very beginning of this show Luisa has toed the line between doing the right thing and making life altering mistakes. For one, if it wasn't for Luisa, Jane never would've gotten pregnant with Rafael's baby. The cause of most of Luisa's problems, however, have stemmed from her on again/off again relationship/affair with Rose and her alcoholism. When it comes to both Rose and alcohol, Luisa is an addict and she's always found it hard to quit. With the discovery of Rose still beginning alive will Luisa accept Rose's over to run away with her or will Luisa choose to stay with her family and continue to mend her relationship with Rafael instead? Also, even though Rose phrased it as a question was she really giving Luisa a choice? It seems we may not be seeing Luisa and Rose for a while.

Will Xo Keep The Baby?

After a constant will they/won't they between Xiomara and Rogelio, the two finally broke up when Rogelio was adamant about wanting to have more kids and Xiomara was adamant about not wanting anymore. Unfortunately, despite Xiomara's wants it looks like she's found herself pregnant once again, and with Rogelio's arch nemesis, Esteban Santiago's, baby. So will she keep it? She probably won't want to but with a Catholic mother and a Catholic daughter in the house Xo will definitely butt heads if she chooses to get an abortion. Still it's Xo's choice so we'll see what she ends up deciding.

Why must there always be an evil twin? Although Anezka tried to play the helpless, lost twin it turned out she and her mother, Magda, were working together the whole time. Doing the ever classic twin switch, Anezka drugged Petra and then dyed her hair brunette while also dying her own hair blonde. Anezka, now masquerading as Petra, then convinced Rafael to sleep with her for reasons that remain unknown. Maybe she's hoping to get pregnant with his baby too? Either way now Petra's trapped in some kind of stroke like state in the hospital while Anezka continues her masquerade as Petra. Will Petra ever catch a break? #SavePetra2016

Make sure to tune in for the Season 3 premiere of Jane the Virgin on Oct. 17 at 9 p.m. on the CW to get all (or at least some) of the answers to these questions.