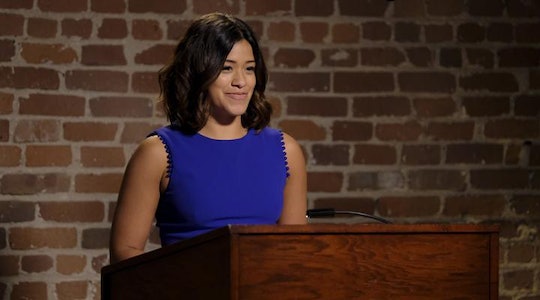 'Jane The Virgin' Is Taking A Short Break

Bad news Jane the Virgin fans! After last week's "Chapter Fifty-Seven" episode, the dramedy is taking a little break before diving back in to all the craziness that makes the show so great. The last episode left off with Jane finding her groove with her editor and coming up with a solid plan for her novel. It also saw the unsurprising end to Abbey and Rafael's relationship, which led to Abbey doing something a little drastic. There are a lot of questions the show needs to answer, which begs the question when does Jane the Virgin come back? Thankfully the break isn't for too long.

Jane and Co. will return on Monday, March 20 at 9 p.m. ET and while the episode may not answer all of the fans' questions right away, it will definitely involve some more political humor and probably a few more jabs at President Donald Trump. Based on the preview, Jane and Petra will be competing to be Room Mom at Mateo, Elsa, and Anna's school, which will most definitely put Rafael in a difficult position. In typical Jane the Virgin fashion, this battle will involve Jane and Petra being dressed as real politicians and facing off against each other as if it's a real political debate.

Besides the debate, it's unclear what else will go down in the episode. Abbey's revenge against Rafael, and presumably Petra, was to take Scott's burn book (which Petra was hiding) and drop it off to the police, along with a greeting card. The burn book may lead to the police reopening the investigation of Scott's death, which they'd closed only the episode before.

This would be bad for both Petra and Rafael. Petra, because she recently revealed to her now ex-boyfriend Chuck that she moved Scott's body onto the property of his hotel so The Marbella wouldn't be involved. No doubt if this investigation is reopened, he'll spill the beans. As for Rafael, he's been acting a bit sketchy and while I find it hard to believe he really did kill Scott, it seems likely that he knows more about Scott's death than he's saying.

Besides Scott's possible murder case, Xo also just got engaged to Bruce at the same time that Rogelio asked Bruce to be his lawyer. This whole set up will most definitely become complicated, especially since it seems like Rogelio still has feelings for Xo.

Unfortunately, Jane the Virgin fans will have to wait a little while to find out what exactly happens next. But knowing this show, it'll definitely be worth it in the long run.