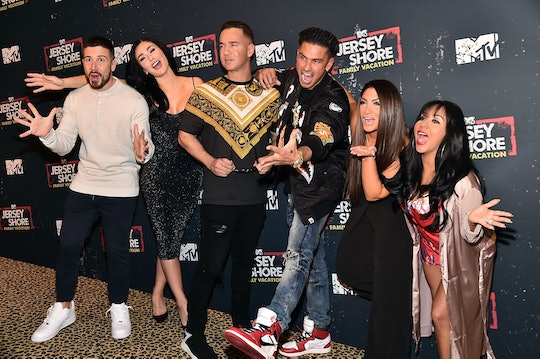 The inaugural season of MTV's eagerly awaited reboot, Jersey Shore: Family Vacation, took the gang to a gorgeous oceanside house in Miami for a month-long reunion away from their quickly growing families. It was surprisingly successful, tapping into all the same heartwarming, ridiculous, and drama-fueled elements of the original, just with a slightly more mature cast. So, naturally, fans are dying to know: when does Jersey Shore Family Vacation Season 2 premiere? MTV was so convinced the reunion would be a smashing success that it greenlit the show for a second season over a month before Season 1 even premiered.

The finale airs on June 28, so we likely have at least a few months to go before getting another Jersey Shore fix. An airdate for the Season 2 premiere hasn't been announced yet, but the cast did start filming at the beginning of June, according to US Weekly. They've even got an all-new shooting location. (Because it's not exactly a "vacation" if you're going to the exact same place where you just spent a month — at that point, it's just an extended sublet.) This time around, the cast will be partying in Las Vegas, where both Pauly D and Ronnie now live full-time. The rest of the cast is still based on the East Coast, but after scoring a DJ residency at the Palms Casino Resort back in 2011, Pauly made the move to Vegas permanent. Ronnie also lives there, although it was revealed during Jersey Shore: Family Vacation Season 1 that he and Pauly didn't really spend time together outside the show.

Nicole "Snooki" Polizzi, Jenni "JWoww" Farley, Mike "The Situation" Sorrentino, DJ Pauly D, Vinny Guadagnino, Ronnie Ortiz-Magro and Deena Nicole Cortese are all set to return to the show for Season 2, which means that yes, Sammi "Sweetheart" Giancola will be sitting out yet another season. Although fans and even some of her former castmates have been hounding her to complete the family reunion vibes by getting the whole gang back together, she's been pretty firmly insisting that her relationship with reality TV is over. And given her ex Ronnie has exhibited some pretty volatile behavior, it's probably for the best that she sets some boundaries for herself.

"Sam told me that he used to call her on blocked numbers, and used to like, be really weird," Deena revealed in a confessional interview during Season 1. "She was afraid she was gonna get in the house and he would get drunk and spiral and try and get back with her or something."

But the show was in danger of losing another cast member for Season 2 as well. Back in April, Nicole told E! that if the show wanted her back for Season 2, it would have to take into account that she's a mom now.

"I would want it to be a different format," she said. "Supposedly it's going to be like a Housewives format, where we film three days a week and then we go about our lives and we're not sequestered in a house for a month without seeing my family."

Nicole went on to reveal that she felt intense mom guilt while filming Season 1, adding, "If it's like that again, I am pulling out of Season 2. Being a mother comes first, so hopefully they'll work with me on that."

Based on reports, it doesn't sound like the Season 2 format is any different, so we'll have to wait until a few more deets come out of the new vacation house to see how production accommodated Nicole's requests, if at all.