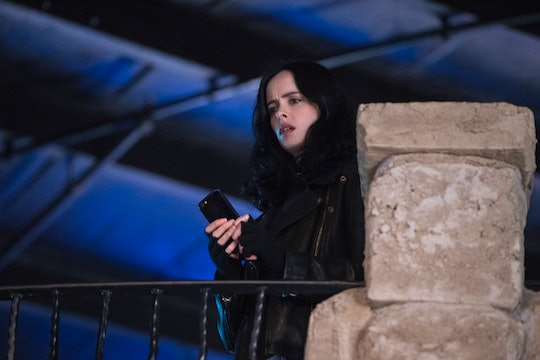 Here's How ‘Jessica Jones’ Season 2 Fits Into The Marvel Timeline

It's been a few years since Jessica Jones has gone solo on Netflix, but now she's back with Season 2. The timeline might feel a little perplexing at first, because it seems like the second season starts soon after Kilgrave's death in the Season 1 finale. But how does The Defenders fit in? When does Jessica Jones Season 2 take place?

Shows in the Marvel Netflix universe tend to unfold in a fairly linear manner: if one show is released after another, you can pretty much rest assured that the events therein happened in the order you expect. There's no jumping around in time. But it does feel as though the timeline might be a little bit compressed. Two and a half years passed in between Season 1 and Season 2 of Jessica Jones in real time, but the same didn't seem to be true in-universe.

In "AKA Start at the Beginning," Jessica is still reeling from Kilgrave's death and her involvement in it. She never discusses the events of The Defenders or how they impacted her mental state, but she is dealing with increased fame as a result of her abilities. Everyone in New York is now aware of Jessica's powers, and that could be due to a combination of taking out Kilgrave, her team-up with the other heroes, and Trish's chattiness on her radio show. However, Trish does specify that she never mentioned Jessica "or the others" by name on air.

But how does that help anyone figure out the timeline? It's proof that Season 2 of Jessica Jones occurred after The Defenders (which everyone could have guessed anyway) but it doesn't clarify just how much time has passed from show to show. Newsweek attempted to puzzle it out, speculating that six months to a year had gone by since Jessica took out Kilgrave, with The Defenders taking place within that window.

They explained it like this: Daredevil Season 2 and Luke Cage Season 1 occurred simultaneously, and The Defenders took place just two months after both. That fact can be figured out thanks to the Elektra resurrection flashbacks, which came with a handy intertitle to let everyone know how long it had been. But Luke Cage only began two to three months after the first season of Jessica Jones, as star Mike Colter told ComicBook.com, "I can tell you what they've allowed me to, which is basically, Luke Cage will take place a few months after Jessica Jones."

Let's try and get that straight, because it can get confusing fast. Jessica kills Kilgrave. A few months later, viewers catch up with Luke Cage in Harlem. Presumably, the whirlwind Luke was dealing with also took at least a couple of months. After the show's conclusion, two more months pass before everyone joins forces for The Defenders — which, as Newsweek points out, happens over the course of just a week.

If you add up all those various months and weeks, then Newsweek's estimate of six months to a year seems reasonable. It makes a lot more sense than the two and a half years of actual time that passed, especially since everything Jessica has been through still seems incredibly fresh in the second season. Of course, Jessica's trauma is so deeply ingrained that she could still be dealing with it two years later, but the emotional impact felt a lot more recent than that.

Figuring out exactly how much time has gone by during and between Marvel shows on Netflix can be tricky, because the timeline isn't always established at the start and end of a season. But guesswork and estimation can produce a totally passable timeline, even if it's one that's a little vague.