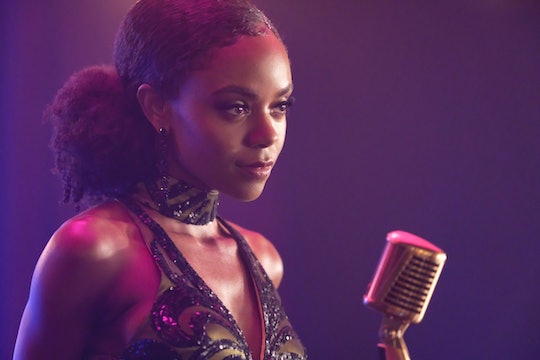 The Riverdale universe is expanding, and it’s taking Josie McCoy with it. Aside from having her sing haunting ballads at La Bonne Nuit and being Archie’s shoulder to cry on, Josie hasn’t had much of a role on Riverdale this season. Fans will get to see much more of her on The CW’s new Archie Comics-inspired series, Katy Keene, but exactly when does Josie’s Riverdale spin-off premiere?

As of now, The CW hasn’t announced an official release date, but according to Newsweek, the new series should premiere in late 2019 or early 2020. As one of the show’s lead characters, actress Ashleigh Murray — who plays Josie on Riverdale — joins the cast as an older version of Josie, now living in New York City. And Lucy Hale, who’s known for her leading role as Aria Montgomery on Pretty Little Liars, is taking on the titular role of Katy Keene.

So what compelled Josie to move on from Riverdale to the big city lights of New York City? As reported by Deadline, in the new spin-off series, a 20-something Josie is working hard to break into the music industry, with ambitions of becoming the next Diana Ross. On her way to stardom, Josie makes new friends, falls in love, and eventually finds the success she’s looking for. The transition totally makes sense for Josie’s character, because if she stayed in Riverdale, the town’s ongoing drama, murder, and mayhem would never let her live her dream.

I’m assuming that one of the friends Josie makes in the city is Katy Keene, a character that Deadline described as a 20-something “bold, big-hearted and independent” New Yorker who works as a personal shopper at a luxury department store and has dreams of becoming a famous fashion designer. According to Archie Comics, the character was first introduced in 1945 in Wilbur Comics as a fashionista who modeled, acted, and sang. Eventually, Katy got her own comic book series, which allowed readers to submit their own fashion designs that would be used in the comics.

But Katy and Josie aren’t the only comic book characters coming to the new series. In February, Deadline reported that the show would follow two more Archie Comics characters. Actor Jonny Beauchamp is cast as Jorge/Ginger Lopez — a bodega worker by day and a drag performer and bartender by night who has dreams of becoming a Broadway star. Saving Hope actress Julia Chan will take on the role of Pepper Smith, a trendy “it girl” who has aspirations to open her own version of Andy Warhol’s Factory, but her methods of making money remain mysterious to most.

While casting choices have been announced, many details about Katy Keene still remain unknown. If you can’t wait to see more of Josie, and are still hoping to find the premiere date, keep your eyes peeled, because The CW should announce more information about the series later this summer.

You can still catch Josie on Riverdale, which airs new episodes on Wednesdays, at 8 p.m. ET on The CW.