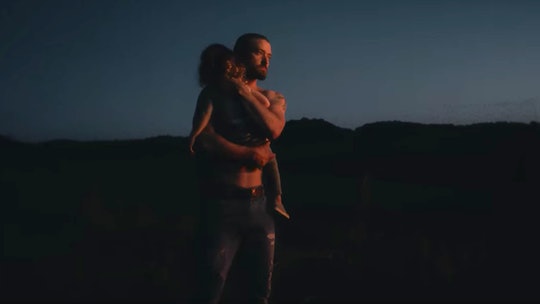 Justin Timberlake Has New Music Coming, & It'll Be Here Before You Know It

Though Justin Timberlake has been dabbling in film for years, he hasn't abandoned the music career that first made him famous. His last album was 2013's The 20/20 Experience, and it's been more than a few years since then. Now he's set to release something new that promises to show a different side of his personality. But when does Justin Timberlake's album come out? Luckily, he's provided a video on his official YouTube page that has all the details.

Timberlake's upcoming album is entitled Man of the Woods, and it releases on February 2. That's exactly one month from today, so Timberlake fans won't have very long to wait for his new music. While the announcement video doesn't offer too many hints about what the album will sound like (though you can hear several songs in the background throughout), it does indicate that he's taking things in a different direction this time.

There's voiceover from both Timberlake and his wife Jessica Biel describing what to expect from Man of the Woods. "This album is really inspired by my son. My wife. My family," Timberlake said. "But more so than any other album I've ever written, [it's about] where I'm from. And it's personal."

Later, Biel offered her opinion too, and it was a lot more abstract. "It feels like mountains, trees, campfires," she said. "Like Wild West. Like now." That could easily be a Calvin Klein ad from the 80s, but also seems to be the concepts the video was structured around. Despite some glimpses of his family and his time in the recording studio, it's far from being as personal as Timberlake's stated inspiration. It's more like his version of Lana Del Rey's "Ride," sans the bikers. There's a lot of Timberlake being, one assumes, a man of the woods: kneeling with his arms spread in fields, staring pensively at the camera while chest-deep in water, and wandering around outside in a homespun blanket.

And that's not all. There's snow! There are horses running free across the plains! Biel wears a cowboy hat! Timberlake wears a leather fringe jacket, and later he holds a toddler while shirtless in the twilight! More voiceover claimed that Timberlake's new album is "so earthy," but apparently the kind of earthy that has a very specific and clear aesthetic. He's been trying hard not to get into trouble, but he's got a war in his mind. So he just rides.

Pharrell appeared late in the 59 second video to helpfully point out that earthy is, apparently, "just where you are in your life right now." He singled out one song as a smash, though neglected to provide its title during the moment of praise. Interested parties will have to take Pharrell's word for it, thought they won't necessarily have to wait four weeks to get a better sense of the album. The caption of the video stated that a new song would be released in just a few days on January 5.

Back in February of this year, Timberlake told The Hollywood Reporter, "It sounds more like where I've come from than any other music I've ever made. It's Memphis. It's Southern American music. But I want to make it sound modern — at least that's the idea right now." The intriguing snippets of the album throughout its announcement video don't sound entirely dissimilar from Timberlake's prior work, but it's impossible to say for certain what the album will be like until it comes out.

Man of the Woods will make its way to the public shortly before Timberlake takes on the 2018 Super Bowl as a half time performer on February 4. That makes for some pretty good promo, so one can assume there might be some new songs making their debut in his performance. Fans will have to tune in and see for themselves.

More Like This
'Hocus Pocus 2' Officially Has A Release Date To Look Forward To
Kate Middleton Explains Why Her Kids Couldn't Attend The Top Gun: Maverick Premiere
Ed Sheeran Just Revealed He's A Dad Of Two With The Sweetest Instagram Announcement
10 Ways ‘Workin' Moms’ Is Basically A Crash Course In Parenting