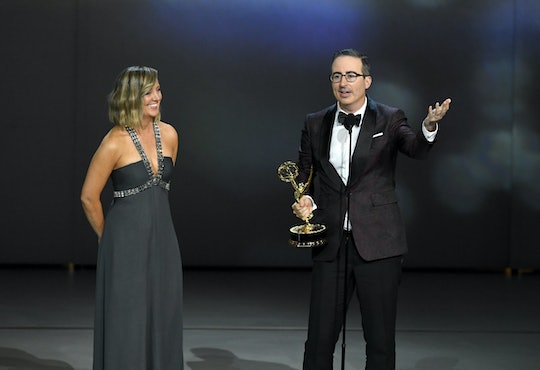 John Oliver's Emmy-winning HBO show, Last Week Tonight is going on its sixth season. If you're an avid watcher, you know the show's taken a brief hiatus — leaving American viewers sadly bereft of the comedian's incisive takes on the seriously bananas political world we all live in. If you're an Oliver fan, let me assure you Last Week Tonight Season 6 returns sooner than you think.

Luckily for you, Last Week Tonight returns Sunday, July 28 at 11 p.m. ET, nearly a full month since the last episode when Oliver examined the dangers of warehouse work. A quick glance to the show's Twitter account showed fans unhappy with the break. They have major opinions, joking, "it's a good thing there wasn't any news this week," and using hilarious memes to get their dissatisfied points across. A GIF of Michael Scott from The Office screaming "No!" always works, in my opinion.

Regardless of how fans are taking the weekly updates, at least someone's taking care of the show's social media accounts. Without new content, it's not easy keeping fans updated on scheduling changes. Last Week Tonight has some making up to do, but I have a feeling fans will forgive and forget the moment Oliver and his crew grace TV screens again.

In the meantime, Oliver's been too busy to deliver breaking news for the network. When he's not creating a new Hogwarts house "exclusively for cowards," he's making a controversial point about climbing Mt. Everest. In an interview with Rolling Stone he discussed climbing the notoriously difficult mountain, claiming its purpose is now just for extremely expensive Instagram photos. He said, "Climbing Mount Everest has somehow gone from being a rare feat of extraordinary skill to something that looks like the line at Trader Joe’s." While straddling the line between satire and truth, Oliver later joked about creating a new Photoshop company, Adventures Indoors Luxepeditions, "the world leader in getting people to the summit of Mount Everest without ever actually going there." Fans can superimpose themselves at the top of Everest to appear as though they climbed. It's not a terrible idea and comes with far less risk.

Controversy aside, the host recently appeared on The Late Show with Stephen Colbert to promote the new Lion King movie, in which he plays Zazu. During the interview, Oliver discussed a promo picture with other stars from the film, including the one and only Beyonce. There's been talk around the web that Queen Bey was photoshopped next to Oliver. He confirmed the conspiracy theory with Colbert, saying, "Yeah, she wasn’t there. If you look at my face, I look really intimated," he continued. "And that’s because what I’m doing is imagining that I’m about to be put into a photo with Beyoncé."

It sounds like Oliver's had a full schedule despite not having a new Last Week Tonight episode the last few weeks. My guess is, once the travel from promoting The Lion King is complete, he'll return to his desk to address the headlines with as much humor and snark as before. I hate to say patience is a virtue, but 'tis the season for vacation. Give the show a break.