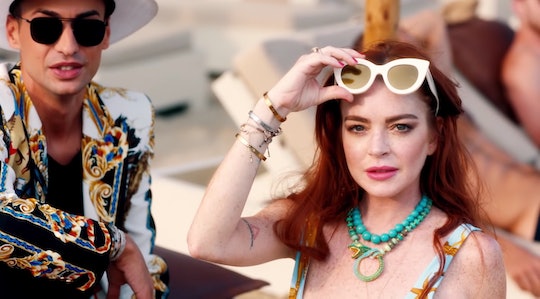 The reality show premieres on MTV on Tuesday, Jan. 8 at 8 p.m., according to Deadline. As explained on the reality show's page on MTV's website, Lindsay Lohan’s Beach Club will chronicle the former teen icon launching a nightclub and restaurant called Lohan Beach House in Mykonos, Greece. Lindsay has been building a business empire in Greece over the past few years — she also owns a resort called Lohan Beach House Rhodes in Rhodes, Greece, and a club called Lohan Nightclub in Athens — so she knows what she's doing at this point.

Because of that, you can expect her to really embrace her leadership role on Lindsay Lohan’s Beach Club. “To work for me, you have to be the best of the best,” she narrates in the show's trailer. Not to mention, as per the show's description on MTV's website: "Lindsay is a no-nonsense boss, and she needs her team to come together to help bring her vision to life."

So what made Lindsay decide to get into the nightclub business in Greece? “I’ve gone through so much in my past. People always have given me trouble for going to clubs — so why don’t I just open my own?” she says in the trailer. She also explains that after being in the public eye for so long, and for so many of her ups and downs, she is ready to change things up. "Now, I want to do things differently. I want to be my own boss," she adds.

Not only will the show chronicle Lindsay's life and her new business, but her staff's as well. And by the looks of the trailer, her employees are going to be the ones bringing the drama this season.

"Everybody's stressed out," one of her employees says in the trailer. "May's crying, Jonitta is wasted, coworkers are hooking up. It's a recipe for disaster," Panos, Lindsay's "left-hand man" says. (Actually, Panos, it sounds like a recipe for a killer reality show.) But in Lindsay's eyes, the drama probably is a disaster. "I didn't bust my ass for this sh*t to happen," she adds in the trailer.

Technically, Panos is Lindsay's business partner — and you can expect the two of them to butt heads this season. "I'm the nice one, I'm more sensitive to people's feelings, and how my employees are being treated," Lindsay says in a sneak peek video on Twitter. "But my business partner, Panos, is more cutthroat. Yeah, he's a tough one."

"Me and Lindsay at the beginning didn't connect at all. She was very diva-ish," Panos adds. However, the more the two worked together, the closer they became. "We saw our differences and we put them aside," he continues. "I feel I'm protective to Lindsay because she is part of my family right now."

So if a Mykonos nightclub sounds like your kind of backdrop for reality TV drama, tune into Lindsay Lohan’s Beach Club on Tuesday, Jan. 8 at 8 p.m. on MTV.