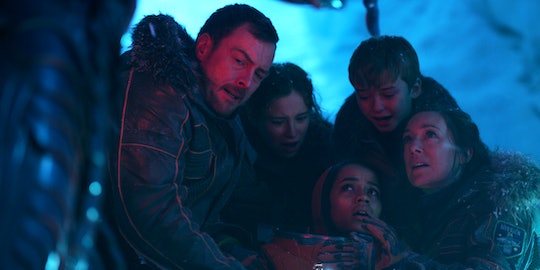 Netflix's 'Lost In Space' Will Show Viewers A Dark Future

The classic 1960s sci-fi show, Lost in Space, has been revamped as a new Netflix series and became available for streaming on April 13. The story follows the Robinson family, who were on course to move to their new home in space only to be thrown off course and end up on a planet lightyears away from their original destination. The show is obviously futuristic, but when exactly does Lost in Space take place?

According to the show description, the series is set 30 years into the future, which would make that the year of 2048, to be exact. Apparently a lot will have changed in 30 years, including colonization in space now being a reality. The Robinsons were tested and then chosen to make a new life for themselves in a "better world," which seems to hint that Earth is not doing well in this future, which, honestly, isn't all that surprising.

The planet they were heading to seems like a place that can give everyone a fresh start, but where the Robinsons end up is a dangerous alien environment that will make life very stressful for those who find themselves stuck there. The family will have to fight to stay alive, long enough to figure out how to get off the planet and back home. However, based on the trailer, it look likes their spaceship is not in very good condition, so leaving the planet will probably be easier said than done.

The series stars Toby Stephens as John Robinson; Molly Parker as Maureen Robinson; Taylor Russell as the eldest Robinson child, Judy; Mina Sundwall as the middle child, Penny; and Maxwell Jenkins as the family's youngest child and only son, Will. The show also stars Parker Posey as Dr. Smith, a mysterious and unsettlingly woman who also finds herself trapped on the planet, and Ignacio Serricchio as Don West, a charming man whose role is a bit of a mystery.

Though the characters in this new reboot are the same as the original, there are some slight differences. For one, this time around Dr. Smith is being played by a woman rather than a man. Showrunner Zach Estrin revealed to the New York Daily News that the change came as an effort to distance the role from the legendary Jonathan Harris, who originally played the character. The reboot is also letting women shine in more heroic roles this time around. Because the original took place in the '60s, the women characters were often pigeonholed into domestic tasks like doing the laundry and cooking. This time, all the characters will have their own heroic moments.

One major important piece that's still part of the series, though, is the robot that Will encounters on the planet. Though the robot is a bit of mystery, Will will make a connection with it, forging a kind of friendship that his family doesn't exactly approve of or understand. One has to wonder if this robot can be trusted or will it lead to even more problem for the Robinson family. Of course, it's much too early to tell, but if you watched the original show you may have some idea of the robot's purpose in Lost in Space.

So whether you've seen the original series (or the film remake that came out in the '90s) or if you've never even heard of the series until now, Lost in Space is definitely worth a watch. Not only is the sci-fi show filled with incredible cinematography, it's also all about family. This group will have to work together to overcome a number of obstacles in order to survive, which will help bring them all closer together. I personally can't wait to see how it all plays out.