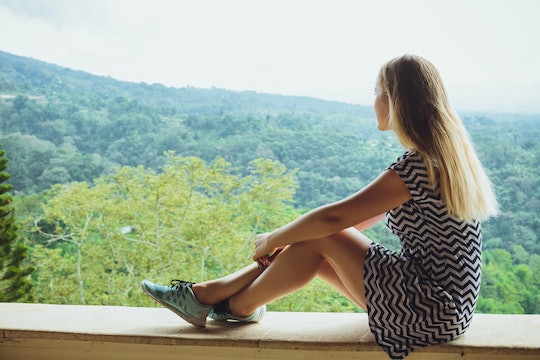 If You Haven't Noticed, Mars Is In Retrograde RN & It's Gonna Be Weird For A While...

If you've been feeling exceptionally tired or angry lately, then the fault may be in the stars (or planets, in this case). Mars is in retrograde, and that can mean all sorts of weird stuff is about to go down. So how long is mars in retrograde, and what does this mean for your daily life? This powerful planet might make quite an impact when it appears to change directions.

For 2018, Mars is in retrograde from June 26 until August 27, as explained in Cafe Astrology. Although perhaps not as well known as the phenomenon of Mercury in retrograde, this is still a pretty important event for people who are into astrology. Mars only goes retrograde once every two years, so it's a less common event, as noted by Armand Diaz of Integral Astrology.

Physically, the planet Mars is still going about its usual business of orbiting the sun. It isn't actually moving backward in the sky. But thanks to the relative positions of Mars and the Earth in their rotations around the Sun, it looks like Mars is moving backward in its orbit from the Earth's point of view, as explained in the StarChild site from NASA. This is what's known as retrograde motion. It's a kind of optical illusion. Although modern astronomers understand the phenomenon very well, the same cannot be said for ancient astronomers. To them, it looked like planets would literally start moving backward in their orbits, which caused some real concern. Even today, plenty of people still attribute weird circumstances to a planet's apparent retrograde motion.

Before digging into the meaning of its retrograde motion, it's important to understand what Mars signifies in an astrological context. Named for the God of War, Mars represents animal instincts, raw energy, and action, according to Cafe Astrology. It's all about getting stuff done and survival and attraction.

So when this force is in retrograde, it dredges up some tough stuff. "This retrograde reveals to us our own anger and the energy it takes to repress it, the destruction it creates when left unconscious, and the un-lived potential that lies in wait when we don’t engage in, and fight for, our passions," said astrologer Chani Nicholas on her website. Issues about control and repression that you face may become clearer at this time.

Because Mars is all about assertiveness and competition, if not outright aggression, its retrograde is a good time to reflect on the nature of these traits in your own life and relationships. Do they serve you or harm you? Consider working against the impulses to go all aggro over tiny mishaps. "Rather than being aggressive, be quick to step down and show compassion," said astrologer Kimberly Peta Dewhirst in Refinery 29. Sure, in some cases it's absolutely necessary to be forceful and assertive. But maybe this is a good time to practice letting go of the small annoyances, such as the person who cut you off in traffic. You don't have to rage out over everything, although this is much easier said than done.

Lastly, the Mars in retrograde time might simply leave you feeling drained. The retrograde energy could cause you to feel overly tired and restless, or even disrupt your sleep patterns, as noted in Elephant Journal. Yuck. Many people don't have an abundance of energy during the height of summer, anyway, so this almost feels pretty unfair.

In general, Mars in retrograde can make you impulsive, aggro, or just super drained. It's an ideal time to work on self care and try to keep your head cool. At least this time of weirdness will come to an end in late August, so it doesn't last forever.