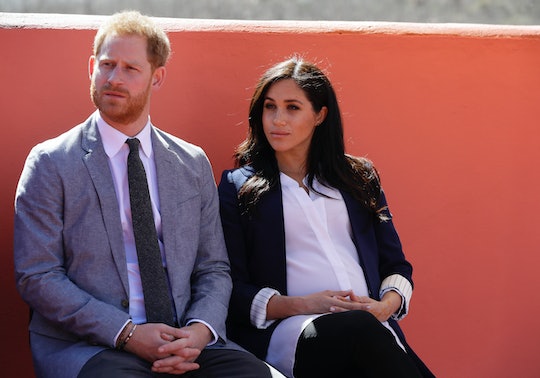 Meghan Markle's Maternity Leave Will Reportedly Last For A Little While

Within a matter of weeks, Meghan Markle and Prince Harry will welcome their first child together. This means that the couple will take some time off to spend with their baby, enjoying life as parents to a newborn and spending some time away from the public eye. Sooner or later, everyone will be wanting to know one thing — when does Meghan Markle's maternity leave end? Although it might be a while before she returns to the public eye, the wait will definitely be worth it.

Earlier this year, in January, Markle reportedly told well-wishers during an official royal appearance that she was six months pregnant and due in late April, according to People. This means that at this moment, Markle has about four more weeks left in her pregnancy. So exciting.

While people are so ready to see their new addition (and find out the baby's sex and name) it's also a bittersweet time. Royal watchers will be sad to no longer see Markle's incredible pregnancy style, or hear the fun anecdotes about her life once she takes officially her maternity leave. It's especially bittersweet considering that Markle's maternity leave has reportedly already begun, according to People. The Duchess doesn't have "any new public duties on her calendar" for the rest of the month, which means she could be preparing to give birth.

And it might be a while before she makes her next public appearance, according to InStyle.

Markle will reportedly head back to work in October, a Palace insider told Vanity Fair. She and Prince Harry are reportedly expected to make their first appearance back in the public eye at the annual summit for One Young World, a forum with youth leaders from all over the world (which is a combination of the couple's favorite things — supporting the youth and encouraging young people to lead).

"All being well with the baby, the timing is perfect for her to expand her Commonwealth work through this new One Young World partnership with the Queen's Commonwealth Trust," the source told Vanity Fair.

Given that Markle does give birth in April, she will have just six months off of work to spend with her newborn, and she deserves to take off as much time as she needs. Being a first time mom is tricky and there is so much for people left to figure out. If she can afford to take the time off, then she should take it.

People can also look to Markle's sister-in-law, Kate Middleton, for any indication as to when she might be making royal appearances again. When Middleton had her first child, Prince George, in 2013, according to Cosmopolitan, she only took one month off (wow). But when she gave birth to her second and third children, she took five and six months off, respectively.

Although she reportedly won't be returning to work until the fall, royal watchers will still be able to catch a glimpse of the Duchess every once in a while. People, of course, will see Markle and her family when their baby is christened a few months after their birth, according to Express. And Markle's better half, Prince Harry, is expected to take two or three weeks away from work to spend time with his newborn, according to PopSugar.

While her leave might be bittersweet, it means that their child will finally be here — and nothing is more exciting than that.