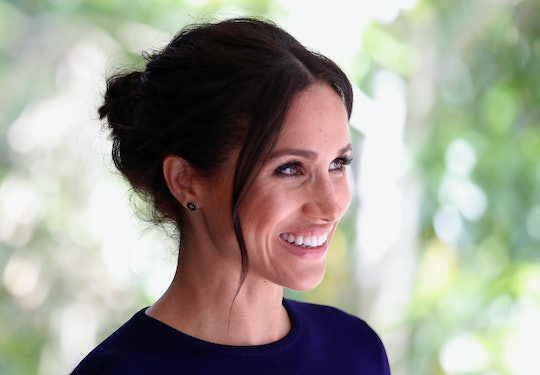 Meghan Markle's Maternity Leave May Have Already Started — Here's Why

Alas, the spring is nigh, and with it a lot of exciting world developments. Game of Thrones is coming back to TV, March Madness is in full swing, and uh, the Duchess of Sussex is about to give unto us all a sweet new little royal to obsess over. As baby countdown continues, some may be wondering: When does Meghan Markle's maternity leave start? The answer is probably... now, or at least, very, very soon.

In the same way that Markle and her husband Prince Harry stopped doing public events about a month prior to their wedding to prepare for the nuptials, and Kate Middleton has traditionally started maternity leave about a month prior to each of her children being born, Markle is likely laying low for the coming weeks, as her baby is due sometime soon, as People reported.

It's clear that royals like to give themselves a few weeks to unwind and prepare for a big life change without the constant pressure of public events and a tight schedule. However, given that People has reported Markle's maternity leave has likely already begun (for the record, these absences are almost never announced, you can just infer from whether or not you see them at events) it means one thing and one thing only: the baby is coming soon.

Also seemingly confirming the news was Harper's Bazaar, as the magazine reported that though she will no longer do any public events, she is still taking meetings and doing business in private. "Her public engagements have finished but she is not on maternity leave yet," a Palace aide reportedly confirmed to Harper's Bazaar. "Meghan will continue working privately behind the scenes, taking meetings. She has also been using this period to catch up with those involved in her patronage-related endeavors."

A source also confirmed something similar to People, adding: "There are plenty of private meetings taking place. If she is to do something public it would be announced, but there are none that are scheduled."

Given that Kensington Palace does not reveal exact due dates for, uh, obvious reasons, piecing together when the Duchess is due has required some sleuthing. For starters, when the pregnancy was first announced, Kensington Palace said it would be happening sometime in the "spring of 2019," as the BBC reported. That's broad, though, and can refer to quite a number of months.

Given that most pregnant women wait at least three months before announcing that they are expecting, most people assumed that Markle was at least out of her first trimester at that point.

This was mostly confirmed when, Town & Country reported, Markle told someone in a crowd at an event that she was six months pregnant and due in April; she reportedly said this back in January. Later, according to Cosmopolitan, George Clooney dropped another important hint, saying in February that she was seven months pregnant, which aligns with the timeline, too.

If it's true that her maternity leave has started, it would make sense, given that all other evidence points to her being around three to four weeks away from delivery. Of course, there's always a margin of error to take into consideration, but generally speaking, we should be meeting with newest royal within the next month or so, and it's for sure an exciting time. Let's hope that Markle takes this opportunity to rest up and enjoy some extremely deserved time off, because jugging motherhood and royalty cannot be an easy task.