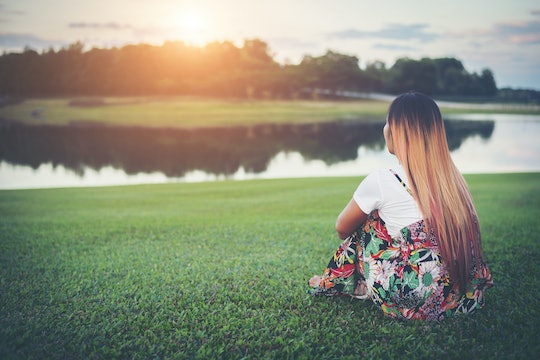 Here's When The Current Mercury Retrograde Cycle Will *Finally* End

Mercury went into retrograde just over a week ago (July 26 to be exact) and if your life suddenly hit the skids you can curse the astrology gods for that. Yep, that recent spat with your partner, that epic toddler tantrum in Target, and that computer crash that came out of nowhere — chalk it all up to Mercury retrograde. That is, if you believe in that sort of thing. So, when does mercury retrograde 2018 end, because it feels like it never will.

I'm not one to usually subscribe to astrological explanations for things, but my daughter has been uncharacteristically cranky lately and when I learned about the power of Mercury retrograde, and how it affects toddlers, I was like, yep, it suddenly all makes sense. "[Mercury retrograde] does set the stage for miscommunication, over-reaction, and the taking personally of words and messages that are not intended for you," explained Dr. Athena Perrakis in a previous interview with Romper.

I'm now totally blaming Mercury retrograde for the roller-coaster of emotions I've been trying to diffuse during my daughter's bedtime. Fortunately, Mercury retrograde is not everlasting, and this current cycle that we're in will officially end August 18, according to astrology expert Susan Miller on Astrology Zone, and then it'll pick up again this year on November 16 and end on December 6.

Apparently, Mercury retrograde can affect all your communications, not just your in-person encounters. If you want to avoid embarrassing digital mishaps, you're going to want to be extra cautious at the keyboard, according to Miller. "Be equally careful about whom you send email to — you don’t want to send a private email to the wrong person or have a sensitive email forwarded to others," advised Miller on Astrology Zone.

I'll for sure be heeding this advice since I accidentally sent a profanity-laced, inside-joke email meant for my siblings to my old boss recently, and I am still trying to cope with my extreme mortification. This was slightly before Mercury went into retrograde, but this tidbit from Bustle probably explains the timing: "Mercury Retrograde has a "shadow period" two weeks before and after its cycle." Damn it, Mercury retrograde!

If you're looking for some other pro tips on how to survive Mercury retrograde, here are some "Do's" from the ladies of Astro Style: "Do: Review all contracts and legal documents before signing, insure/track important mail and packages, and back up your digital data (photos, contact lists, files)."

It kind of sounds like a lot of work, TBH, but I'm sure well worth it to avoid the Mercury-fueled chaos. Plus, it's important to know what to do during a Mercury retrograde situation because it occurs more than you'd think — three to four times a year, to be exact, according to Allure. Add the shadow period to each cycle, and it really can feel like you're in a never-ending cycle of unlucky events.

And if you really want to plan for — and brace against — the communication complications that come with Mercury retrograding, you can find all of the upcoming cycles (through 2030) here.