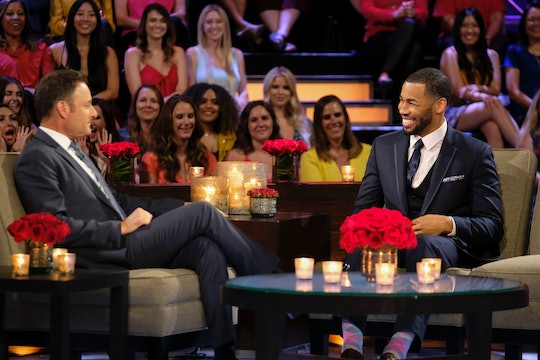 Mike Makes A Connection On 'Bachelor In Paradise' — But When?

Barely a week has passed since Hannah's unprecedented conclusion to The Bachelorette but Bachelor in Paradise is already gearing up for its season premiere. Eagle-eyed fans spotted Mike Johnson from Hannah's season in the trailer for a split second, even though he wasn't announced as part of the official cast. That means he'll show up later in the season, as contestants get weeded out during rose ceremonies, either to shake up an established couple or to scoop up someone who hasn't quite found a connection yet. But when Mike comes on Bachelor in Paradise still remains to be seen.

When the official BiP cast announcement was made, Mike was still in the mix on Hannah's season of The Bachelorette; of course, production wouldn't want to spoil his ending with Hannah by revealing that he went to Paradise. However, since he pops up in the first trailer, I'm guessing that means fans will see him in the first half of the season. Mike is seen holding hands with Caelynn Miller-Keyes, from Colton Underwood's season of The Bachelor, which is interesting to note since she goes on to have what looks like a tumultuous relationship with Blake Horstmann, from Becca Kufrin's season of The Bachelorette. The question of who Caelynn connected with first likely holds the answer to whether we'll be seeing Mike on the early or late side of BiP Season 6.

Then, there's the fact that Mike is still in the running to be the next Bachelor. In an Aug. 2 interview with Entertainment Tonight, ABC exec Rob Mills revealed that Mike was "absolutely in contention," saying:

He is just somebody that people really love. He's got a great story. We have somebody who has served our country, has really suffered through heartbreak. … You’ve got a billion dollar smile and he looks great. He's got a following; those are the reasons he's in contention more than, ‘Oh, this is so great, we can check that off now.’

The last part of that quote is a reference to the fact that there's never been a black Bachelor, although Rachel Lindsay took the title of first black Bachelorette back in 2017. Mike obviously has the charm, appeal, fan love, Air Force veteran status, and killer Bachelorette edit to support a campaign for Bachelor. But there is one variable in his relationship history which could throw off his chances — and a run on BiP may actually help.

Mike admitted to Hannah during the course of her season that he had only been in love once before and, after that relationship didn't work out, he basically closed himself off to love. For a 31-year-old to only have been in love once is a little bit of a red flag in my opinion, and it suggests a serious lack of meaningful relationship experience. Lots of Bachelor/Bachelorette contestants come into the show with one big heartbreak from which they're still traumatized, but it's usually contestants in their mid-20s.

But if he does need a little more relationship experience, then Bachelor in Paradise might be a great primer for Mike before heading into The Bachelor. Though many think a run on BiP ruins people's chances of being the next Bachelor/Bachelorette, this could actually be exactly what Mike needs to strengthen his heartbreak muscle and learn how to move forward in healthier, more efficient ways. Plus, both Colton and Nick Viall went on to be the Bachelor after stints on BiP, so it's not like it's a total deal-breaker. In the meantime, fans will have to keep their eyes peeled for Mike when Bachelor in Paradise airs Monday and Tuesday nights on ABC.