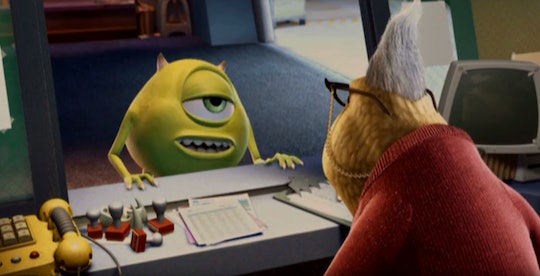 Mike and Sully fans may not be able to contain their screams after hearing the big news coming out of Monsteropolis. John Goodman and Billy Crystal are reprising their roles for a new spin-off series, Monsters At Work, which is set to premiere on Disney’s new streaming platform Disney+. I’m sure fans are more than ready to dive back into the excitement, but exactly when does Monsters At Work air?

According to a Disney press release, Monsters At Work will air in 2020, but it’s official premiere date has yet to be revealed. Disney+ — a streaming subscription service featuring content from Disney, Pixar, Marvel, Star Wars, and National Geographic — will launch in late 2019, so fans will have to wait until then to begin streaming all their favorite Disney goodies, including Monsters Inc. and Monsters University.

If you’ve been missing all the corporate action and excitement from Monsters Inc., you’ll be happy to know that Monsters At Work will pick up where the original movie left off, in a world where Mike and Sulley discovered that children’s laughter is 20 times more powerful than their screams. So now, instead of being sent out to frighten children, Monsters Inc. teams are charged with making kids giggle to power the city. The new series is centered around Tylor Tuskmon (Ben Feldman), an eager and talented mechanic from the Monsters, Inc. Facilities Team that is hoping to become a Laugh Room floor jokester alongside his idols Mike and Sulley.

Along with Crystal and Goodman, IGN revealed that most of the original voice cast of Monsters Inc., including John Ratzenberger (Yeti), Jennifer Tilly (Celia) and Bob Peterson (Roz), will also reprise their roles for the series. They will be joined by franchise newcomers like Ben Feldman (Tylor), Kelly Marie Tran (Val Little, Tyler’s best friend), Henry Winkler (Fritz, a scatterbrained boss), Lucas Neff (Duncan, a plumber), Alanna Ubach (Cutter, a staunch follower of the rules), Stephen Stanton (Smitty and Needleman, a team of bumbling custodians), and Aisha Tyler (Millie Tuksmon, Tylor’s mom). Plus, along with voicing Roz, Peterson will play Roz’s twin, Roze.

The cast seems just as ready to jump back into the fun as the fans. In a tweet, Crystal shared his excitement for Monsters At Work and revealed that he and Goodman are already busy with the project. “John and I are already at work,” tweeted Crystal. “So great to be MikeW again, and team up with John. Terrific scripts and as always genius @Pixar producers. It's been awhile, Boo is 22 now and a yoga instructor!”

It’s still not clear whether Monsters At Work will drop with an entire season (similar to Netflix shows) or if it will air new episodes week-to-week, but when Disney+ launches at the end of this year fans should have a clearer picture on the format, along with an exact premiere date. Waiting a year to get back on the Laugh Room floor with Mike and Sulley may feel like a lot of time, but I’m sure seeing the team together again will be well worth the wait.