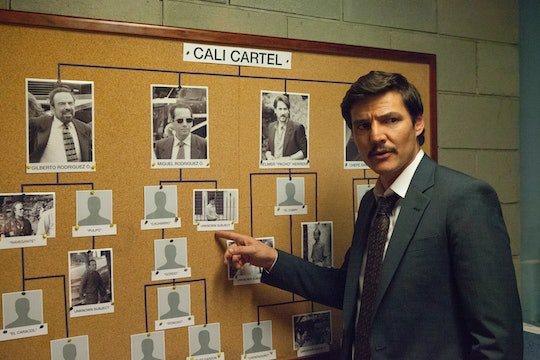 Fans Will Have To Wait A Bit For 'Narcos' Season 4

Soon after the second season of Narcos was released on Netflix, it was announced that the series was renewed for Seasons 3 and 4. Now that Season 3 is about to be released, though, fans are already clamoring for the next installment. So when does Narcos Season 4 premiere? Though there is no set release date as of yet, it seems fair to assume it will debut sometime in 2018.

Since the show first premiered on Netflix in 2015, a new season of Narcos has released every year around the same time of late August or early September. So unless something occurs to disrupt production, fans can expect the fourth season to release around the same time next year, though it's difficult to say which characters will still be around for Season 4.

Despite the fact that what happens on Narcos can sometimes seem too wild and violent to be real, the storylines actually come from real people and the very real cocaine trade in Colombia. Therefore, for those who knew the history, it wasn't all that surprising that the show's main character, Pablo Escobar, met his end during the Season 2 finale. Sticking pretty close to the actual event, Pablo was killed on top of a rooftop, leaving many to wonder where the show would go from here. In a preview for the third season, fans got their answer.

With Pablo out of the picture, the Cali cartel will take over the cocaine trade. The four Cali godfathers, known as "the Gentlemen of Cali," still have to worry about the Drug Enforcement Agency (DEA), but they'll be running their business a bit differently than Pablo did.

Just as seasons prior, the show will continue to follow those involved with the drug trade and DEA Agent Javier Pena, who attempts to take the cartels down. Though the show will certainly be different without Pablo, according to the reviews, the new season may be even better without him. Changing up the way the show is done, many critics see the new season as a "fresh approach" to the series.

Additionally, many are wondering if this third season will mark the end of the Colombia story. Some are hoping the show will move on to Mexico and take a look at the infamous El Chapo and his role in the cocaine trade. Narcos executive producer Eric Newman told The Hollywood Reporter he doesn't know when/if the show will get to El Chapo, but that it's certainly a possibility. Fans will just have to wait and see what the show has in store for the seasons to come.